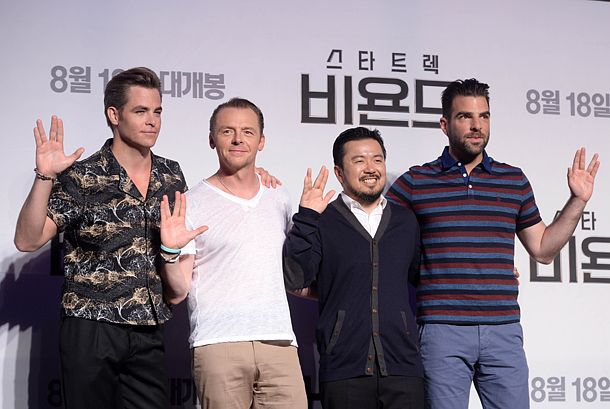 From left, Chris Pine, Simon Pegg, Justin Lin and Zachary Quinto pose for a photo shoot after a media event held on Tuesday at the Grand InterContinental Seoul Parnas, located in Samseong-dong, southern Seoul. They visited Seoul to promote “Star Trek Beyond,” which opens on Thursday. [NEWSIS]

“Star Trek Beyond,” the third and final installment of the rebooted “Star Trek” television show and film franchise, will focus on the crisis the crew of the USS Enterprise goes through after their spaceship is torn apart rather than individual growth stories, according to the film’s leads and director, who visited Seoul to promote the sci-fi flick. Korean audiences will enjoy watching the crew members confront destructive enemies, they said.

The first two installments in the reboot, “Star Trek: The Beginning” (2009) and “Star Trek Into Darkness” (2013), were directed by J.J. Abrams. Taiwanese-American filmmaker Lin, best known for the “Fast and Furious” series, takes the helm of the newest installment.

It has been reported that Abrams wanted Lin in order to include the same kind of stylish action sequences found in the “Fast and Furious” series in “Star Trek Beyond.”

“[Lin] was great in taking over the reins … It was a seamless transition,” said Quinto Tuesday.

Lin said, “I grew up watching the [Star Trek] TV series. I used to make indie films using my credit cards but it’s amazing that I can be part of this great franchise movie.”

“Star Trek” first aired as TV series in 1966 and its immense popularity has spawned diverse versions of the story from comics to books to film series.

“Star Trek Beyond” is the 13th film in the series and it is being released this year to celebrate the 50th anniversary of the debut of the Starship Enterprise and its crew.

The film was released on July 22 in North America and received positive reviews from critics.

Along with the new director, the latest film also has new writers. One of them is Korean-American TV writer Doug Jung, who was absent from the press conference. Pegg also participated in writing the story.

“We were on the same page when we discussed what we wanted for the movie,” said Pegg.

When asked what keeps the “Star Trek” saga popular, Quinto said, “I would say it’s a result of our friendship and connection.”

Other actors in the third installment include John Cho, Zoe Saldana and Idris Elba.

The film opens on Thursday at theaters nationwide.