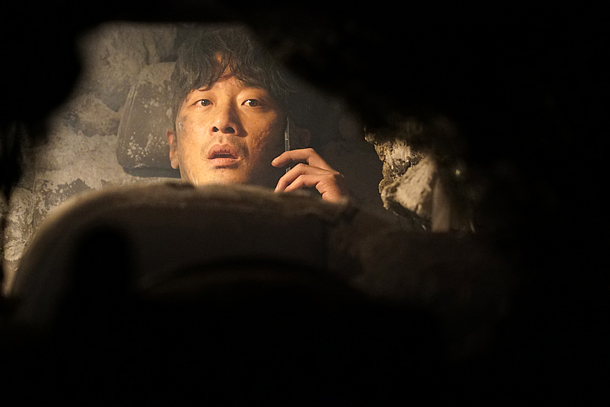 Disaster film “Tunnel” topped the local box office over the weekend. Featuring Ha Jung-woo, one of the most prolific actors in the country’s film scene, “Tunnel” sold 2.5 million tickets between Friday and Monday. [SHOWBOX]

The disaster movie “Tunnel” starring Ha Jung-woo capitalized on the so-called golden holiday that started Friday and ended on Monday, the 71st Liberation Day and topped the local box office over the weekend.

Over the hot holiday weekend, theaters saw an increase in moviegoers looking for a way to escape the heat and domestic films benefitted from the traffic.

“Tunnel” was released August 10 and sold 2.5 million tickets between Friday and Monday. Six days after its release, “Tunnel” sold a total of 3 million tickets, according to the Korean Film Council, which supports and fosters the domestic film industry.

“Tunnel” depicts the protagonist Jung-su, played by Ha, attempt to survive in a tunnel that suddenly collapses. His only possessions are a partially charged smartphone, two water bottles and a birthday cake for his daughter.

During the holiday, “Tunnel” accounted for 65.2 percent of ticket sales, the highest among all the films playing at theaters nationwide.

Ha is one of a few actors who receives rave reviews from critics and loyal support from audiences. He is also one of the most prolific actors in the country.

“Tunnel” is Ha’s second release this year. Ha’s previous film “The Handmaiden” was released in June and sold 4.2 million tickets, despite its 19 and over rating.

Even with controversy surrounding the film, “The Last Princess,” based on the life of Princess Deokhye of the Daehan Empire (1897-1910) ranked second this weekend.

Some of the film’s critics said the film glorifies royal families of the Daehan Empire including Princess Deokhye, but the film, in its second week of release, sold 3.9 million tickets over the weekend.

The period film passed the break-even point on Sunday after it sold 3.5 million tickets. This means, actress Son Ye-jin, the lead actress of the film, will be able to recover the 1 billion won ($914,243) she invested in the film. It is rare for actors to invest on their films but Son reportedly wanted to do so because she wanted the film to be a success.

Korean war blockbuster “Operation Chromite” came in third and stayed strong in its third week. The film is based on the Battle of Incheon, which turned the tide of the Korean War in favor of the United Nations and South Korea.

“Train to Busan,” the first Korean blockbuster featuring zombies, ranked fifth. The film already sold more than 10 million tickets and has become the 14th Korean film to achieve that milestone.

Sports film “Run Off,” based on the true story of the national women’s ice hockey team, came in sixth.

Other films playing over the weekend included the animated feature film “The Secret Life of Pets,” “Suicide Squad” and “Jason Bourne.”

Meanwhile, the Korean Film Council released a statement on Tuesday that said seven out of 10 Korean filmgoers watched a domestic film between August 1 and 15, the busiest days for local theaters.