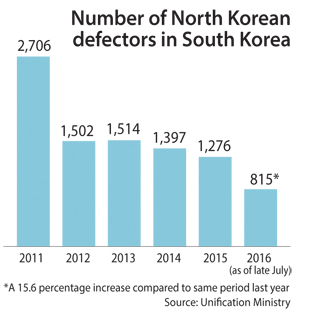 A North Korean diplomat stationed in Britain left his post to seek asylum in another country earlier this month along with his wife and child, the latest in a series of defections by senior North Korean officials.

According to a source with in-depth knowledge of North Korea on Monday, the diplomat embarked on a defection journey “following a scrupulous plan” and was in the process of “landing in a third country as an asylum seeker.” In matters of defection, “third country” signifies a country that is neither North nor South Korea.

“The North Korean Embassy in Britain tried to find him, but it is said that it has failed,” said the source, who spoke on the condition of anonymity.

The source said the official had been under growing pressure from Pyongyang to combat the diplomatic heat from the international community over North Korean violations of human rights.

London has been a leader in international efforts to raise the issue of human rights violations in North Korea.

An official at the Unification Ministry in Seoul, which is in charge of handling North Korean issues, said Tuesday the report could not be confirmed or denied.

Earlier this year, the media reported the defections of a North Korean party official and his family from a job in Russia. According to the source, that official was escaping growing pressure to find extra sources of foreign currency to be transferred to Pyongyang.

North Korean leader Kim Jong-un was reportedly incensed upon being told of defections of high-class North Koreans, another source said.

“Upset by such reports, Kim ordered diplomats’ families return to Pyongyang (so that officials would not think of defection),” said the source.

The boy, identified as Ri Jong-yol, won three silver medals at the annual math contest: at the 2014 contest in Cape Town, South Africa, at last year’s in Chiang Mai, Thailand, and in Hong Kong last month. Those experiences gave him glimpses of the world outside North Korea. North Korea has been mum on Ri’s defection.

It is not uncommon for privileged North Koreans to seek refugee status in a third country rather than defecting to South Korea. Ko Yong-suk, the maternal aunt of Kim Jong-un, sought asylum in the U.S. and now lives there with her husband and two children.

Song Hye-rang, the older sister of Song Hye-rim, former North Korean leader Kim Jong-il’s second wife, sought asylum in France along with his daughter and son-in-law. They are said to have settled there.

“For those coming from the highest circle of power, they prefer Western countries for their rigorous protection programs, as they could be targeted by Pyongyang,” said a government official who asked not to be named.

Along with the defections by high-class officials, the number of defections of average North Koreans is also on the rise after years of decline.

But as of late July, 815 North Koreans made it to South Korea in 2016, a 15.6 percentage increase compared to the same period last year.