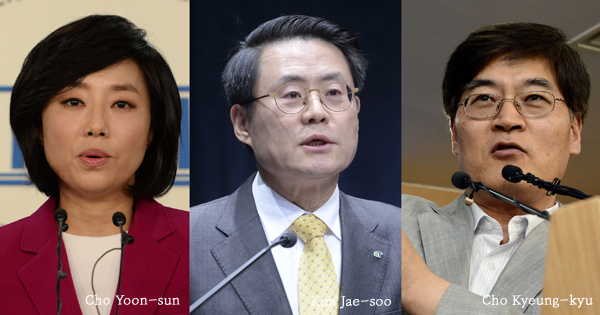 President Park Geun-hye carried out a minor reshuffle of her cabinet on Tuesday, naming a loyalist as culture minister while keeping an embattled veterans affairs minister and a scandal-plagued senior civil affairs secretary.

The reshuffle replaced three ministers and four vice ministers. Cho Yoon-sun, former minister of gender equality and former senior presidential secretary for political affairs, was named minister of culture, sports and tourism, and Kim Jae-soo, president of the Korea Agro-Fisheries and Food Trade Corp. was named minister of agriculture, food and rural Affairs. Cho Kyeung-kyu, deputy head of the Office for Government Policy Coordination under the Prime Minister's Office, was selected as minister of environment.

Park Kyeong-ho, a lawyer and former senior prosecutor, was named vice chairman of Anticorruption and Civil Rights Commission. The commission will implement a newly introduced antigraft law, expected to bring about major changes in the government, media and education communities. Not only public servants, but journalists and teachers at private schools as well as their families are covered by the law, which is so strong that concerns have been raised about it harming the economy by discouraging domestic consumption.

While Park replaced some top aides, she kept Woo Byung-woo, senior civil affairs secretary, and Minister of Patriots and Veterans Affairs Park Sung-choon. Woo has faced a series of corruption scandals and is being investigated for alleged ties to Jin Kyung-joon, the first director-level prosecutor detained in a corruption investigation. Woo, as a civil affairs senior secretary, is accused of having detected Jin’s irregularities during the vetting process for his promotion last year and ignoring them.

Minister Park was involved in a series of controversies throughout his term. Opposition lawmakers made three attempts to pass a resolution to demand his dismissal. The latest attempt came in June over his plan for a military parade to mark the anniversary of the Korean War. Some lawmakers said it was a grave insult to the public as his plan included the 11th Airborne Brigade, responsible for a massacre on May 18, 1980 during a democratic uprising in Gwangju.

Minister Park was appointed to the post on Feb. 24, 2011 by then-President Lee Myung-bak. President Park kept him to the post after she took office.

Park also kept Foreign Minister Yun Byung-se, making him the only minister to remain in the cabinet since the launch of her administration in February 2013. Until Tuesday’s reshuffle, the cabinet had three inaugural members, but Park replaced the agriculture and environment ministers, while keeping her foreign minister.

In the reshuffle, Park rejected a plea from close ally Lee Jung-hyun, the new chairman of the ruling Saenuri Party. During a meeting with Park last week after he was elected to head the party, Lee asked Park to include officials from the Honam region in the reshuffle.
None of the three newly selected ministers are from Honam, a term referring to Gwangju and South and North Jeolla provinces. Of the heads of 18 ministries in the Park administration, Justice Minister Kim Hyun-woong and Labor Minister Lee Ki-kweon are the only two members from Honam. None of her presidential senior secretaries are from the region.

During her presidential campaign, Park has promised more balanced appointments and to end the long tradition of regional rivalry between Honam and Yeongnam regions. Yeongnam is comprised of Busan, Daegu, Ulsan and North and South Gyeongsang provinces. Since she took office in 2013, Park often named officials and politicians from Daegu and North Gyeongsang, her political strongholds, to top posts.
Opposition parties, which together control a majority in the National Assembly, condemned Park’s latest reshuffle, suggesting that tough confirmation hearings are ahead for the new nominees.

“The reshuffle had no purpose,” said Rep. Park Kwang-on, spokesman of the main opposition Minjoo Party of Korea. “It is far, far from any intention to improve state affairs.

“It is unbelievable that the fate of Woo was not even mentioned, despite the steady demands from the public and opposition parties to fire him,” Park said. “All the nominees probably went through Woo’s vetting process. It is unacceptable for Park to present nominees vetted by someone at the center of various scandals.”