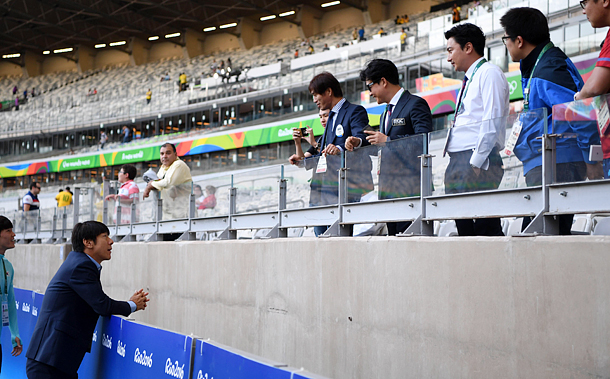 When the Korean Olympic team lost to Honduras 0 to 1 in the football quarterfinal match on Aug. 14, commentator Lee Young-pyo said, “If Korea had scored first, the Honduran players wouldn’t have delayed the play so much. The responsibility is on our side.” Fans are upset as the players exaggerated injuries and delayed the game. Instead of harshly criticizing Honduras along with the fans, Lee remained poised and critical.

Ten years ago in 2006, in the last match of the group round at the World Cup in Germany, the second goal by Switzerland was acknowledged while an assistant referee raised a flag. Koreans fans were outraged, and a commentator shouted out, “This is a fraud.” But Shin Moon-sun was the only commentator to say that it was not offside, but a goal. He was severely criticized and had to retire.

What was important was not the truth, but having someone to vent the anger of the public. So, I was worried that Lee Young-pyo may have touched a nerve. But the people seem to be more favorable towards Lee, calling him “a fact-checker.” Online postings defended him and said that while the game was regrettable, a sports commentator should not be swayed by extreme nationalism.

China used to be driven by sports patriotism, but they have changed, as well. For the first time in 16 years, China did not win any gold medals on the first day of the Olympics. But the Xinhua News Agency reported that Chinese athletes who remained composed were more valuable than news of a gold medal.

20-year-old swimmer Fu Yuanhui represents how China has changed. In the semifinal round of the 100-meter backstroke, Fu finished third and qualified for the final round. When asked whether she is ready for the final round, she said, “I’ve already used all my energy, so winning a medal won’t be possible. I am satisfied with my result today.” Even in the socialist state of China, banal remarks like, “I will do my best for the nation and the people” do not seem to work.

From the 1980s until recently, the Olympic Games have often swept up other domestic issues.

It seemed like winning a gold medal was a shortcut to the developed world. Koreans are still passionate about sports, but the race for medals cannot make the Thaad controversy disappear, and people are more upset about the progressive billing system for electricity.

The viewer ratings for the Olympic Games is not very high.

A drama episode substituted for the Olympic broadcast had higher ratings. Dankook University’s professor of sports management Chun Yong-bae said, “It is about time we become free from the Olympics, and the Rio Olympic Games would be a turning point.”

When the Olympic Games are held, Koreans will still passionately cheer for Korean athletes. We will wear red t-shirts and gather in public squares and be moved by the sportsmanship. But we shouldn’t obsess over the results of the games, the number of gold medals or rankings. We already know that having 10 gold medals and being in the top 10 won’t change our lives.


*The author is a deputy cultural news editor of the JoongAng Ilbo.