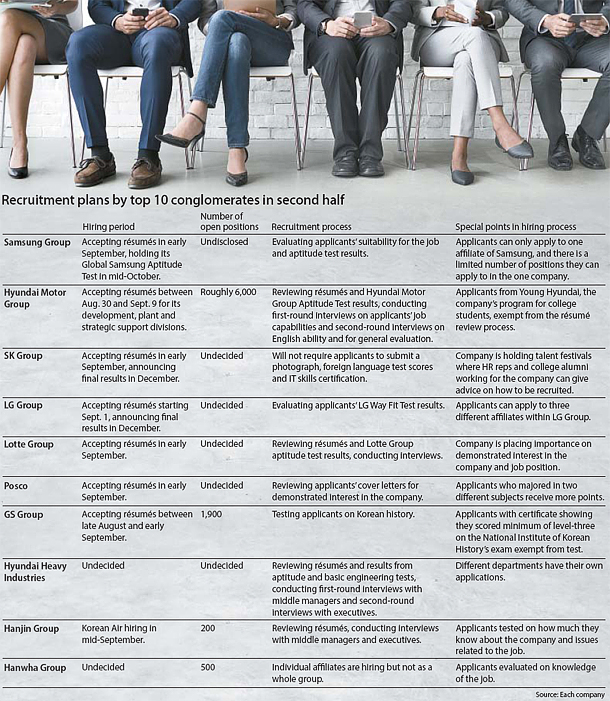 Major Korean companies are preparing for another round of recruiting in the second half of the year, starting with Hyundai Motor Group at the end of this month, and the competition for young college graduates is likely to be fierce as businesses are planning to hire the same number, and in some cases fewer, recruits compared to last year.

There are even companies that have yet to decide if they will make new hires this recruitment season due to uncertainties in the Korean economy. This is especially the case in the local shipping and shipbuilding industries, which are both undergoing a restructuring process.

“We haven’t prepared a hiring plan [for the second half] as we are in the process of accepting voluntary retirements from our production employees,” a Hyundai Heavy Industries official said. “During negotiations between management and labor, we asked [the labor union] to hold back on giving priority in hiring the children of union members.”

The recruitment process for the country’s top 10 conglomerates has become much more challenging.

The scrutiny from the character tests and interviews is expected to be more intense because companies have done away with looking at so-called specs that include school grades, language abilities and skills certifications. Applicants are also no longer required to provide personal information such as family relations, foreign language test scores and even a photograph of themselves, which have long been customary components of Korean job applications.

Instead, their personality fit with the company and job skill level will be evaluated through assignments and tasks.

Over 57 percent of human resources representatives said they consider the interview with middle managers to be the most important step in the hiring process.

In the case of LG Group, applicants will have to take a character evaluation test called the “LG Way Fit Test,” where they have to answer 342 questions in 50 minutes. The goal is to see if recruits have characteristics that fit LG’s philosophy and corporate culture, which the company calls the “LG Way.” Applicants then have to take another aptitude test that lasts 2 hours and 20 minutes and evaluates their level of qualification for the job.

Hanjin Group, on the other hand, is doing away with multiple-choice tests altogether and going straight to the interview.

Recruiters across the board are placing stronger emphasis on applicants’ cover letters.

“The ones that are good are the ones that are honest and don’t copy a standard cover letter form,” said a human resources representative at LG Chem. “Last year, many of the applicants described themselves as matryoshka dolls, as if they were copying from the same cover letter sample.”

Recruiters are advising applicants against writing cover letters that begin with “I am” and then their names.

Some major conglomerates are holding recruitment seminars to provide job seekers with more information about the company and how to improve their chances of getting hired. Hyundai Motor is holding a seminar at Dongdaemun Design Plaza next Thursday and Friday, and SK Group is planning “talent festivals” in major cities including Seoul and Busan.

The financial industry is also kicking off its hiring season for the second half of the year.

KB Kookmin Bank is expected to post a public recruitment call later this month. The commercial bank plans to take on 300 new employees, the same number hired during the second half of last year.

Shinhan Bank, which was the only commercial bank to hire new employees in the first half of this year, plans to take on 200 new employees. Their recruitment notice is also expected to appear at the end of next month.

The state-owned Industrial Bank of Korea is currently in talks with the government about its budget and the number of new recruits it plans to hire. Woori Bank is planning to hire around 200 employees, similar to last year, at the end of next month.

NH Nonghyup Bank, which suffered a deficit in the first half, is expected to make a decision on its recruitment timeline and number of new positions by next month.