Defecting envoy from London is in South Korea

Defecting envoy from London is in South Korea 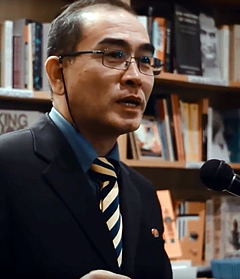 Thae Yong-ho, a North Korean diplomat who vanished from his post in London in mid-July, is in South Korea with his wife and children, the South Korean government announced Wednesday.

The announcement of the arrival of the most senior diplomatic defector ever followed a flurry of media reports in Korea and abroad speculating over Thae’s motivation since his defection was first reported in the JoongAng Ilbo Tuesday.

“Diplomatic minister Thae Yong-ho recently arrived in the Republic of Korea with his wife and children,” said Unification Ministry spokesman Jeong Joon-hee at a hastily arranged press briefing. “They are now in government custody.”

Jeong refused to go into details over the defectors’ motives or the route they took, citing diplomatic concerns.

Asked why Thae came to Korea instead of seeking asylum in a third country, as was widely reported previously, the spokesman refused to answer. In matters of defection, “third country” signifies a country that is neither North nor South Korea.

Jeong also didn’t confirm how many children Thae and his wife brought with them or when the family arrived in the country.

British media reported that Thae’s older son had a degree in the economics of public health from a British university and his younger son went to a public high school.

The younger son’s classmate was quoted by the Guardian as saying that his North Korean friend, who was reportedly born in Denmark and came to London four years ago, had vanished in mid-July and all his social network accounts went dark.

The government emphasized that Thae was the most senior North Korean diplomatic official to have defected to South Korea. In 1997, the North Korea Ambassador to Egypt, Jang Seung-gil, defected to Seoul, but Thae is more senior.

It was the second defection the Seoul government made public in four months, a rare move for the authorities here because defectors can be put at risk.

In April, the government revealed the defection of 13 North Korean restaurant workers who escaped from their work place in China to defect to the South en masse, sparking a backlash from Pyongyang, which claimed they had been tricked by South Korean intelligence agents. The North demanded the immediate repatriation of the 13 defectors, which was rejected by Seoul.

The official announcement of Thae’s defection will embarrass the Kim Jong-un leadership in Pyongyang, especially the signal that unity among its elite in Pyongyang is crumbling. North Korean leader Kim is reported to have been incensed at a spate of defections by North Korean senior officials overseas and ordered tightened surveillance of diplomatic officials, including a strict ban on officials coming into contact with South Korean cultural content, such as K-pop songs or television dramas.