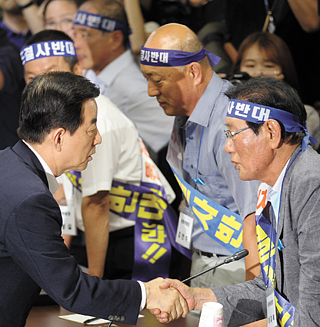 No progress was made when the government Wednesday made an additional attempt to persuade residents of the southern town of Seongju that its plan to deploy a controversial antimissile system in their neighborhood was a sound one by arranging a visit by the defense minister.

According to the ministry, Han met with about 30 representatives of the town and listened to their opinions. At the meeting, Han apologized once again for having failed to notify residents in advance of the site selection.

During the meeting, some residents requested the Ministry of National Defense to come up with an alternate site as soon as possible, the ministry said.

“If the town makes a proposal,” the ministry said Han replied, “we will consider it.”

Seongju residents protested the planned deployment mainly for health concerns, but the government and U.S. military assured them that the electromagnetic waves emitted from the system’s radar are not harmful. As protests continued, President Park Geun-hye said earlier this month the government will try to find a different site within the town. Defense Minister Han also said Tuesday that the military could consider selecting an alternative site within Seongju, should residents offer such a place.

According to the ministry, representatives of the protesters’ group asked various questions about the necessity of deploying Thaad in Korea and its military effectiveness. They also raised safety concerns. According to local media, no specific site was discussed as an alternative.

During the meeting, Han reportedly presented the data that led to the selection of Seongju as the site. The residents, however, criticized the military for offering them only shallow information and demanded a more detailed site survey.

“We apologize for having failed to properly explain in advance about the site selection to the Seongju residents,” Han said at the meeting. “But it was a decision made to protect the people’s safety. There will be no Thaad deployment if there are no North Korean nuclear and missile threats.”

About 100 police troops were dispatched to the county office where the discussion took place in order to prepare for a possible scuffle. When Han arrived at the building, about 100 protesters waited for him. “We cannot accept Thaad!” they shouted, but no melee took place.

After the meeting, he faced stronger resistance. Some threw water at the defense minister.

Unlike his first trip, in which he and the prime minister used a helicopter, Han went by train to Daegu and then took a military vehicle from there to Seongju, hoping to show a more humble attitude toward residents.

The number of officials accompanying Han was also reduced to five in order to keep the trip low-profile.