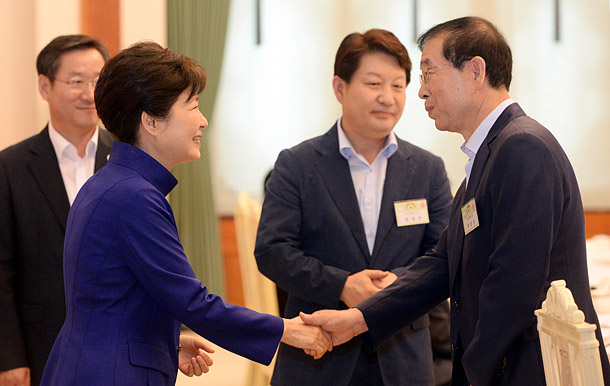 Seoul Mayor Park Won-soon, right, exchanges greetings with President Park Geun-hye, left, in a luncheon with mayors of metropolitan cities and governors of provinces at the Blue House on Wednesday. [JOINT PRESS CORPS]

Seoul Mayor Park Won-soon made a direct appeal to President Park Geun-hye on Wednesday to reconsider the administration’s decision to shut down the city’s controversial youth unemployment subsidy program, but the request was snubbed.

President Park invited mayors of metropolitan cities and governors of provinces for a luncheon at the Blue House. Key government officials also joined the meeting, which was intended to discuss efforts to boost regional economies under the theme of “creative economy” and tourism. President Park, in her opening speech, said the meeting was open to other pending issues.

Seoul Mayor Park said he urged the Park administration to cooperate with the city government to resolve the serious issues concerning the nation’s young adults. He said the central government should allow the city’s program because it intends to complement the administration’s policy.

Last week, the Seoul city government distributed the first cash allowance to the 2,831 recipients who signed agreements with the city. Each recipient received half a million won ($452). The payments are part of a five-year program called the Seoul Youth Guarantee, aimed at supporting unemployed and underemployed young adults. The city set aside some 9 billion won to provide 3,000 recipients with 500,000 won per month for up to six months.

The Ministry of Health and Welfare, concerned about the moral issue of handing out cash to young adults, shut the program down the next day and requested that the city government collect the money it had handed out. The Ministry of Labor also announced a similar subsidy program, fueling the controversy on the legitimacy of the welfare ministry’s decision.

The city said it was left with only one option -- filing a lawsuit to the Supreme Court to overrule the ministry’s order. Mayor Park still said last week it is not ideal to take the matter into court, asking instead for an opportunity to sit down with President Park to discuss the issue.

The mayor had an opportunity to talk to the president at the luncheon at the Blue House. Appealing to the central government to reverse its decision, the mayor said, “we may still need to bring the case to the Supreme Court on Friday and I do not want that to happen.”

While President Park reportedly remained silent, other central government officials defended the welfare ministry’s decision. Minister of Government Policy Coordination Lee Suk-joon said the central government was pushing for an employment assistance package and the city should use it, rather than giving out cash in a separate program.

Vice Interior Minister Kim Sung-lyul also asked the mayor to operate his project within the framework of the central government’s policy directions.

Following the luncheon, Mayor Park told reporters that he felt extremely frustrated to see that the central government would not budge.

“It was my third appeal, and I saw no change,” he said. “But I truly hope that the government will discuss this issue with us.”