South will purchase Baseline 9 system, ‘Thaad of the Sea’

South will purchase Baseline 9 system, ‘Thaad of the Sea’ 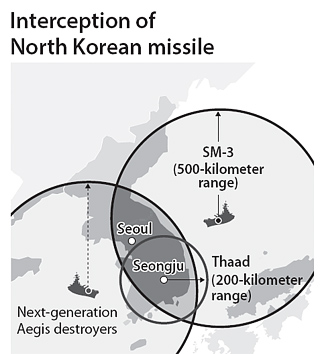 The South Korean Navy reached a deal with Lockheed Martin to purchase the latest Aegis defense system for its next-generation Aegis destroyer fleet, slated to be built in the mid-2020s.

In an announcement posted on its website, the U.S. aerospace company said, “The global Aegis fleet will expand in the U.S., Japan and the Republic of Korea under a $490 million deal with Lockheed Martin.”

The Maryland-based company did not specify how much of the $490 million deal will regard Seoul. Under the agreement, the latest Aegis systems will be set up for the next three KDX-III Sejong the Great-class battle ships.

The three destroyers will be equipped with a so-called Aegis Baseline 9 system, which the Lockheed Martin touts as the “latest evolution of the combat system” capable of integrated air and missile defense.

The Baseline 9 system brings with it the “most advanced multi-function radar system” paired with the MK 41 Vertical Launching System, which the arms provider said was “capable of delivering missiles for every mission and threat environment in naval warfare.”

The three Aegis-equipped fleets operated by Korean Navy are run with the Baseline 7.1 operator. Unlike the Baseline 9 operator, the 7.1 version is capable of detecting missiles with a powerful radar system but lacks interception capability.

“Aegis destroyers such as Sejong the Great are capable of detecting and tracking missiles more than 1,000 kilometers [621 miles] away with its SPY-1D radar system,” said a Navy official, speaking on the condition of anonymity, “but interception capability is not included in the system.”

With the purchase of the Aegis Baseline 9 operating system, the official said South Korea will have naval fleets capable of shooting down a ballistic missile from North Korea.

The purchase agreement comes on the heels of the decision by Seoul and Washington to deploy a U.S.-operated missile defense system in Seongju County, North Gyeongsang, by the end of next year to better guard against North’s missile threats.

Experts say the additional deployment of the Baseline 9 Aegis system will bolster the country’s missile defense system both on land and sea by introducing what could be called the “Thaad of the Sea.”

“On any given Aegis destroyer,” said Shin Jong-woo, director of the think tank Korea Defense Security Forum, “there is a more powerful radar system than Thaad. If it is equipped with an intercepting missile system, then it becomes a Thaad-destroyer on the move out at sea.”

He added, “While Thaad on land will be located in one given area, Aegis destroyers have the strategic advantage of mobility.”

With the Baseline 9 system, intercepting Standard Missile-3s (SM-3s) can be mounted onto the system, which can target intermediate and long-range ballistic missiles. SM-3s can fly up to 500 kilometers either in altitude or distance. For Thaad, the operational range is 200 kilometers in distance and 150 kilometers in altitude.

“While a decision on the purchase of SM-3s has not yet been made because of budgetary concerns,” said the Navy official, “it is likely that they will be purchased since we will have the Baseline 9 system.”