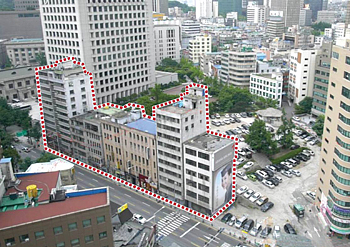 There are seven decaying buildings strangely ornamented with rectangular shapes right in the center of Seoul, where land is worth its weight in gold, a stark contrast to the clean modern structures surrounding them.

The seven old buildings are located beside the Westin Chosun hotel in Sogong-dong, Jung District, central Seoul. The cafes, massage parlors and other shops in these buildings were all closed down last week. A restaurant on the first floor of one of the buildings had a notice that said, “Due to the reconstruction of this building, we are closing our restaurant on Dec. 22, 2015,” indicating that the reconstruction did not take place for seven months.

The seven buildings sit on about 6,562 square meters (1.6 acres) of land, which the construction company Booyoung Group purchased for about 1.7 trillion won ($15 billion) from its previous owner, Samwhan Corporation, in order to build a hotel.

Booyoung Group submitted construction plans and went through a committee review process under the Seoul city government and various construction companies last October. They also purchased three buildings next to that plot early this year. All that remained was to secure the committee’s approval.

But the progress was halted when the Seoul city government asked to preserve five of the seven buildings as they are part of an initiative to preserve modern architecture.

In 2015, the city government designated 210 buildings in the center of older Seoul as works of modern architecture worth preserving, but they have not been registered as cultural properties by the Cultural Heritage Administration, which means there are no legal grounds for preserving those buildings.

An official from the Seoul city government explained that the designations were made by various construction-related committees, history and architecture experts and some 60 Seoul citizens.

“The Seoul city government is suggesting solutions that are just unrealistic and are restricting us from building the hotel,” said an official from Booyoung Group. Following Seoul’s urban architectural plan, which was made in 1976 and revised in 2014, the seven buildings are an issue because of a government plan to widen the road in front of those buildings to 25 meters (82 feet). “Having to widen the road while preserving those designated buildings would mean having to levitate them.”

The official added, “We have suggested preserving the buildings by removing tile ornaments but the Seoul city government is asking us to leave the pillars on the first and second floors, making a passageway and leaving the upper parts of the building, but after a thorough safety review, we cannot guarantee any safety for the people who walk in the passageway underneath those buildings.”

In response, an official from the Seoul city government said, “Seoul Metropolitan Government is not a safety-related group. Booyoung Group needs to progress on their own and be responsible for the safety.”

Some experts say that there should have been more discussion and revision when selecting which buildings to preserve.

“It’s a problem when a local autonomous group singlehandedly selects cultural assets without preparing any methods to preserve them,” said Lee Hyun-wook, an architect from Kwangjang Architecture. “Also, if they are going to restrict development for the sake of preserving modern architecture, there should at least be an institutional measure to compensate businesses that are being affected.”

An architect who requested to remain anonymous said, “We need to reevaluate how much the designated buildings are worth, culturally speaking. Just because a building looks old does not mean it’s worth being preserved.”