‘My mother picked me up every time I fell,’ says taekwondo champ

‘My mother picked me up every time I fell,’ says taekwondo champ 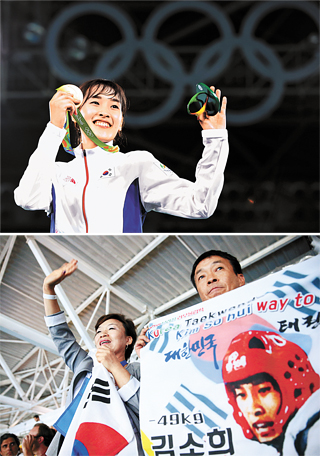 Top: Kim So-hui of Korea, gold medalist in this year’s Olympics in the women’s 49-kilogram taekwondo event during the award ceremony on Wednesday in Rio de Janeiro, Brazil. Bottom: Kim’s parents cheer for their daughter in the arena. Kim says her parents have kept her focused throughout the years. [JOINT PRESS CORPS, JOONGANG PHOTO]

“I am happy to be in the lucky seven for Korea at this year’s Olympics,” said Korean taekwondo athlete Kim So-hui after she found herself above everyone else on the podium on Wednesday in Rio de Janeiro, Brazil. And her journey to clinch that seventh medal for her country was as dramatic as any.

On the opening day of the taekwondo competition, Kim demonstrated to the entire world the prowess of Korea as the birthplace of the sport through a series of bouts that eventually earned her a gold medal.

Her first match in the women’s 49-kilogram event in taekwondo on Wednesday at Carioca Arena 3 in Rio, Brazil, was the round of 16 against Julissa Diez Canseco Verde of Peru. Kim ended the match without any trouble, reeling in 10 points with attacks.

The drama started during the quarterfinals match against Panipak Wongpattanakit of Thailand. During the opening set of the bout, Kim moved ahead 2-1 with one point from a kick and one from a warning penalty by the Thai athlete. Kim, however, failed to hold the lead and yielded three points to Wongpattanakit, who landed a defensive kick on Kim’s head in the second set. But the third round made all the difference. With four seconds remaining in the set, Kim nailed her opponent with a kick to the head to claim three points and take back the lead. The final few seconds were not nearly enough for the dumbfounded Thai athlete to add more points to the scoreboard, and the match came to a close at 6-4.

As if this was not theatrical enough, Kim clinched a win over Yasmina Aziez of France in the semifinals with a golden point. A golden point rule applies when the outcome of a bout is not settled during regulation time. The fight goes into the extra set and during the extensions, whoever tallies the first point takes the match. About 90 seconds into the extra set, Kim dodged a kick and landed a roundhouse with her left foot to take the point and conclude the match.

Then came the gold medal match against Serbia’s Tijana Bogdanovic.

After Kim quickly took the lead in the opening frame, Bogdanovic became more aggressive in the third set. By the end of the set, with less than five seconds to go, the score stood at 7-6. In the final few seconds of the bout, with Kim hanging on to a narrow lead, Bogdanovic attacked and Kim went down as the referee called the end of the game. The Serbian side challenged the call, arguing that Kim went down before the ref ended the match and thus Kim should receive another warning, which would have forced the match into an extra round. But the challenge was rejected and Kim’s side celebrated the 7-6 win.

No one could have asked for a more climatic turn of events than this, but even before Rio, Kim’s life has been marked by up and downs.

When she was in elementary school, her family ran a restaurant in Jecheon, North Chungcheong. They had everything they needed, it seemed, until the restaurant burnt down one night and left the family heavily in debt. “I worked from early in the morning every day to pay off the debt,” Kim’s mother said. “We run a small restaurant now but I don’t want the public to know where it is because I do not want to embarrass my daughter.”

The way in which Kim got started in her sport is no less dramatic.

“So-hui would bleed out her nose and we had to take her to emergency room because she bled so much,” Kim’s mother recalled. “To make her healthier, I recommended she try taekwondo. She fell in love with it instantly.”

She added, “Before she went to high school, I would ride a bike and lead So-hui on a run. She even won a marathon once when she was in high school.”

Kim added, “But my parents have always been there for me. I remember eating only one banana and one yogurt a day for a week to lose weight to compete in the 46-kilogram category. It was so physically demanding I wanted to throw away my passport when I was passing by Han River once so I wouldn’t have to go to an international competition. But then, I thought of my mom and I ran the track at the training center that night to gather my senses.”

Indeed, Kim’s parents were not about to miss their daughter making history in Rio. They were present in the arena as Kim defeated her opponents one by one to reach the podium.

“I did not grow up in an affluent family,” Kim says, “but I had a strong mother who picked me up every time I fell.”