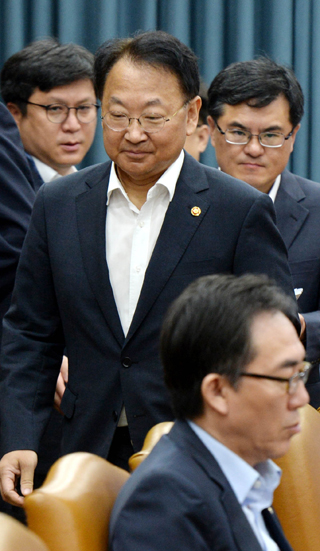 “We will reject all forms of protectionism through bilateral and multilateral diplomacy and high-level meetings [between countries’ related government departments],” Yoo said during a meeting of economic ministers at the central government complex in downtown Seoul. “Some are using the expression ‘Korenter’ to express the importance of Korea maintaining an open strategy, and I believe the implications it is making are huge.”

The phrase “Korenter,” a portmanteau of “Korea” and “enter” to contrast “Brexit,” first appeared in a column published in the JoongAng Ilbo on Aug. 5 by Kim Young-wook, a former JoongAng Ilbo reporter who is currently an adviser at the Korea Institute of Finance.

Titled “Korenter is the solution to survival,” Kim wrote on the need for Korea to remain active in the global system to survive current economic conditions including low growth and shrinking Korean exports, in contrast to protectionist sentiment in the United States and United Kingdom.

There have been growing concerns about rhetoric against free trade from both Hillary Clinton and Donald Trump on the U.S. presidential campaign trail. Countries across the world have also been enacting trade protection measures including raising tariffs and increasing scrutiny of imports.

Such a movement toward protectionism is a major concern for Korea, with an economy that is dependent on exports.

Due to the sluggish global market, Korea’s exports have been on a decline for 19 consecutive months. Exports in July reported a double-digit fall for the first time in three months.

“There is a protectionist movement outside of Korea, and there are concerns about each country heading toward focusing on seeking ways to survive on its own,” Yoo said. “There are even studies that show two out of three Korean exporters are feeling trade protectionism due to antidumping duties applied to several items such as steel and chemical [exports] in the United States and India.”

“Since Russia is heavily dependent on natural resources exports, Korean companies will be able to see different opportunities there,” Yoo said.