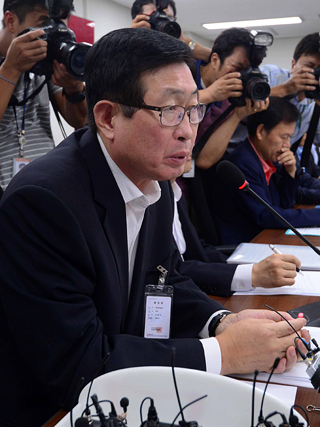 Cho Hwan-eik, CEO of Korea Electric Power Corporation, listens to government officials and experts at a meeting at the National Assembly building in Yeouido, western Seoul, on Thursday. The government and the ruling Saenuri Party launched a task force to discuss the electricity billing system. [NEWSIS]

The government and ruling party launched a task force to discuss the electricity billing system on Thursday, and said that they will come up with specific plans or changes that will be made by the end of this year.

An official at the Saenuri Party said it plans to lower the number of levels to three and the gap between the starting price and the most expensive amount that a household that consumes the most has to pay. Currently, customers have to pay 1,100.7 percent more than the starting price if they consume more than 500 kilowatts in a month.

The system was established during the 1970s oil crisis, and there have been many attempts to fix the law, but no progress has been made.

“The billing system was introduced when the government was facing electricity shortage issues in order to save energy,” said Minister of Trade, Industry and Energy Joo Hyung-hwan. “I do agree that we need to improve the system now as the demand for the electricity has risen significantly from the past as well as the people’s income in general.”

The task force will be headed by Rep. Lee Chae-ik from the Saenuri Party and Sohn Yang-hoon, an economics professor at Incheon National University. The team said it will meet once or twice a month to discuss the issue. The task force will also hold meetings to hear public comments.

Meanwhile, the Trade Ministry issued warnings to 21 retailers and tickets to two retailers who kept their doors open during operating hours after visiting 14 shopping districts, including Myeongdong and Gangnam in Seoul.

Officials visited 1,769 retailers on Tuesday and found 1.3 percent violating the rule on keeping doors shut to save electricity during a heat wave.

The government will fine such retailers up to 3 million won ($2,703) if they repeatedly operate their businesses with their doors open. The inspection period will last until August 26.