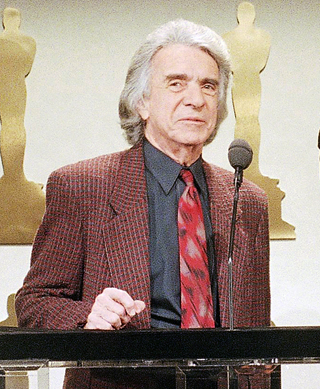 LOS ANGELES - Arthur Hiller, who received an Oscar nomination for directing the hugely popular romantic tragedy “Love Story” during a career that spanned dozens of popular movies and TV shows, died Wednesday of natural causes. He was 92.

The Academy of Motion Picture Arts and Sciences announced his death Wednesday. Hiller served as Academy president from 1993-97.

Although since dismissed by some as overly syrupy, “Love Story,” with Ali MacGraw and Ryan O’Neal as star-crossed Ivy League lovers, was one of the most popular movies of 1970. The film, based on the popular novel of the same name by Erich Segal, reduced thousands of moviegoers to tears and created a national catch phrase: “Love means never having to say you’re sorry.”

MacGraw said in a statement Wednesday that Hiller was “an integral part of one of the most important experiences of my life.”

“He was a remarkable, gifted, generous human being and I will miss him terribly,” MacGraw said. “My heart and love go out to his family. “

Interestingly enough, Hiller recalled in 1991, the film almost didn’t get made.

“Paramount was in rocky financial shape,” he recalled, and executives wanted to cancel the project. But production boss Robert Evans loved the script and allowed Hiller to proceed - if he would spend only $2 million. The director brought the film in $25,000 under budget, then insisted on spending $15,000 for memorable scenes in the Boston snow.

“Love Story” kicked off a busy two decades of work for Hiller, who had gotten his start directing such television shows as “Gunsmoke,” “Perry Mason” and “The Rifleman” in the 1950s.

He directed nearly two dozen feature films between 1970 and 1990 and was equally at ease with comedy or drama. He even helmed a musical, 1972’s “Man of La Mancha” with Peter O’Toole and Sophia Loren, and a biography, 1976’s “W.C. Fields and Me,” with Rod Steiger and Valerie Perrine.

His more memorable comedies included “The In-Laws” with Peter Falk and Alan Arkin, “Plaza Suite” starring Walter Matthau, among many others.

Notable dramas were “The Americanization of Emily” with Garner and Julie Andrews, “The Man in the Glass Booth” with Maximilian Schell, “The Hospital” with George C. Scott and Diana Rigg and “Tobruk” with Rock Hudson and George Peppard.

Hiller’s versatility, plus his willingness to take on projects unworthy of his talent, may have forestalled recognition of his achievements. Although he earned good reviews for his better films, his lesser ones were savaged by critics. His only Oscar nomination came for “Love Story,” for which he won a Golden Globe.

Hiller once explained his choice of scripts, saying, “I prefer them with good moral values, which comes from my parents and my upbringing. ... Even in my smaller, lesser films, at least there’s an affirmation of the human spirit.”

A soft-spoken man with a black mane like a symphonic conductor’s, the Canadian-born Hiller served two terms apiece as president of the Academy of Motion Picture Arts and Sciences and president of the Directors Guild of America.

In 2002 the Academy presented him with its Jean Hersholt award for humanitarian service.

He was born in Edmonton, Alberta, where his parents operated a Yiddish school and theater.

When asked what kind of work he was seeking, Hiller replied: “I want to be a director.”

But three weeks after making the statement he was directing public affairs programs. He eventually advanced to dramas, where he caught Hollywood’s attention.

He was hired by NBC in 1955 to direct a live drama, “Matinee Theater.” He would go on to direct “Playhouse 90,” “Naked City,” “Route 66” and many other series before moving on to feature films.

Hiller married Gwen Pechet in 1948 and the couple had a son, Henryk, and daughter, Erica. They were married for 68 years until her death in June. AP