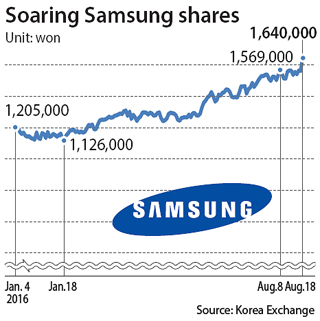 Shares in Samsung Electronics hit an all-time high Thursday, a day before the No. 1 smartphone manufacturer officially launches its Galaxy Note 7.

Samsung shares have continued to rise after the manufacturer recently posted the best second quarter earnings in nearly two years.

Shares of Samsung Electronics have been on a roll thanks not only to smartphones but also its attempts to enter new sectors such as electric vehicles. Reviews of its new Galaxy Note 7 have been very generous, with many industry insiders praising its unique features, including an iris recognition system.

Analysts, on the other hand, had mixed views of Samsung’s new record price.

“Samsung Electronics currently is fundamentally weaker compared to 2013, when the company’s shares were very strong,” said Lee Jong-woo, head of research center at IBK Investment Securities. “The company expanded market share by launching Galaxy S3 and S4 products in 2013 and those models were, in fact, quite successful. However, sales of the Galaxy S7 are slowing and there are many competitors entering the market such as Chinese smartphone manufacturers.”

Lee warned that there are risks for investors since share prices that rise sharply tend to fall rapidly.

“I believe that the price will go as high as 1.7 million won or 1.8 million won as demand from foreign investors continues to grow, but it will fall for quite some time after,” Lee added.

Another analyst believed the smartphone manufacturer’s shares have potential to get up to the 2 million won level.

“The company is very successful in producing dynamic random-access memory and organic light-emitting diode products,” said So Hyun-chul, a researcher at Shinhan Investment.