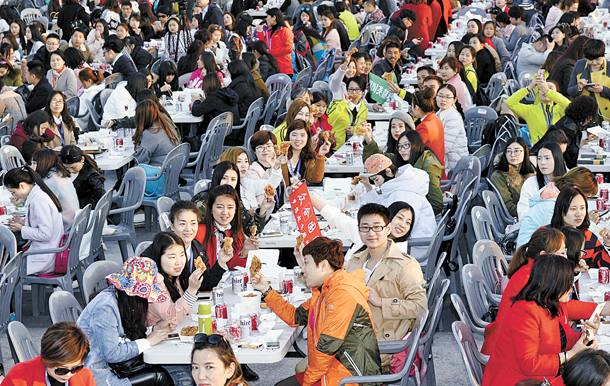 On March 28, the Wolmido Culture Street in Jung-gu, Incheon, was boisterous — 4,500 employees and executives of Aurance International Beauty Group, a cosmetics and health supplement company based in Guangzhou, were having a chicken and beer party. They ordered 3,000 chickens and 4,500 cans of beer. Less than five months after the visit, the street is once again lively, thanks to a sculpture in the shape of a beer can the city decided to install this year.

The sculpture was to commemorate Aurance Group’s visit, as they spent four days in Incheon during the seven-day trip. A beverage company is to cover the cost of creating and installing the 1 meter-tall (3.3-foot) sculpture. In return, the company can put its brand on it.

Last month, Incheon proposed the idea to the three major alcoholic beverage makers, and one of them was willing to participate in the project.

The company had provided beer for free for the Aurance Group’s visit.

Incheon claims that it wants to install the sculpture to attract more group tourists from China. Since the Aurance Group’s visit, Incheon became better known among Chinese.

Longrich Group, based in Jiangsu Province, is to send 30,000 employees over three years. This year, more than 20,000 Chinese visitors will come to Incheon for business meetings. Aurance Group is to hold corporate events in Incheon by 2018. The constant flow of Chinese tourists could improve Korea-China relations.

Incheon is not the first city to encourage Chinese tourists to visit en masse. Jeju named the main street of Yeon-dong “Baozen Street” in 2011 in response to Baozen sending 11,000 tourists at once.

However, Incheon’s beer can structure has faced substantial criticism.

Critics say a beer can bearing a brand name is not appropriate as a symbol of Korea-China friendship. In fact, the committee in charge of reviewing installations in Incheon asked the design to be reconsidered as it was similar to the beer sold by the sponsoring company and could be seen as an advertisement.

Kim Song-won of the Incheon Citizens Coalition for Economic Justice said that it was not appropriate to install a structure that may be seen as an advertisement for a certain company when the actual economic gain for Incheon from Aurance Group’s visit was not significant.