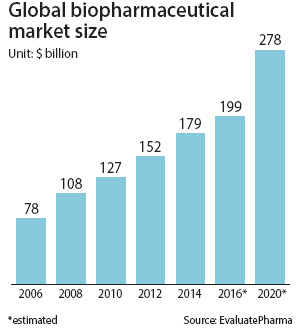 Hopping on the global trend of banking on the biopharmaceutical industry as the cash cow for the future, Korea’s business lobbying group and industry insiders called on the need to foster more bio start-ups and improve the business environment for biopharma players.

The Federation of Korean Industries (FKI) and the Incheon Metropolitan City government jointly held a seminar in Incheon on Thursday to discuss changes in the biopharmaceutical industry. About 200 biopharma insiders from companies, start-ups, academia and business lobbying groups were present.

“Bio start-ups work on early-stage technologies developed from universities and research institutes so they could be delivered to actual pharmaceutical companies,” an official from FKI said.

“However, in Korea this bridging tie is very weak.”

According to 2013 data from the FKI, there are more than 300 bio-related start-ups, however because of financial difficulties, these companies are unable to serve as a bridge between universities and larger corporations.

“Biopharma companies by industry nature cannot have stable earnings, which is why these start-ups cannot list themselves on the Kosdaq market,” said Kim Myung-kee, CEO of LSK Investment.

To be listed and remain on the nation’s tech-heavy stock market, companies need annual revenue of at least 3 billion won ($2.7 million).

“Rules must be revised considering industry characteristics like in the United States where Nasdaq requires a certain amount of market capitalization rather than annual sales revenue,” the FKI said in a statement. Also, the lobbying group asked the government for special funds catered to early-stage bio start-ups as existing funds mostly support more mature companies.

FKI also stressed the importance of establishing a bio business cluster like in the United States, Singapore and Ireland where the biopharmaceutical industry is strong.

“For Korea to grow into a leader in bio industry, we need aggressive national support to form business clusters like in Singapore,” said Kim Tae-han, CEO of Samsung Biologics.

The Singaporean government was at the center of forming a business cluster in that country. It put forward an initiative called Biopolis of Asia as its major business focus in 2000, setting bio industry as its future growth engine. Every year the country injects 3.4 trillion won into the cluster for research and development and human resources training. The Biopolis cluster has R&D centers filled with high-tech facilities crucial to biotech development. The country also provides tax cuts to these companies.

Korean drug makers Samsung Biologics and Celltrion rank third and fourth globally based on output of biopharmaceutical manufacturing facilities, following Switzerland’s Lonza and Germany’s Boehringer Ingelheim. Also, with 52,000 bioenginering graduates annually, Korea has sufficient resources to compete in the biopharma industry, according to the FKI.