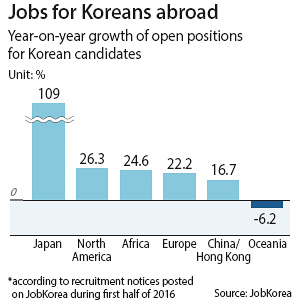 As youth unemployment soars high in the nation, Korean job seekers are checking out opportunities in Japan.

Japan suffers from an aging population and shrinkage in its pool of human resources. Recruiters are hunting for talent from nearby countries, including Korea.

“What you see in Japan right now is a situation in which, for example, certain airlines are cancelling flights because they can’t get pilots,” said David Swan, head of both Japan and Korean operations of headhunting company Robert Walters. “It’s very difficult for companies to hire and it’s very competitive so they have to be a lot more proactive in promoting themselves as attractive employers.”

In July, 35 Japanese companies including ANA Airlines and Sumitomo Mitsui Bank visited Korea to participate in the 2016 Korea Career in Japan hosted by Korea International Trade Association, a job fair set up for 300 selected young people. Over 2,000 job seekers applied.

About 71 landed jobs in Japan through the program.

However, before dreaming of a career in Japan, job seekers need to be aware that they need certain skills.

“People need to realize that Japan is a land of opportunity not only for Koreans but for job seekers from other countries as well,” said Kim Tae-hyung, managing director of Pasona Korea, a job placement consulting company for Japan-based firms. “There is no special merit for applicants just because they are Koreans.”

According to data from Human Resources Development Service Korea, 632 job seekers found employment in Japan last year. That is roughly twice the figure in 2013, which was 296. The number has been on a gradual increase from 228 people in 2010. This year, 170 job seekers managed to land jobs in Japan.

Despite the growth in numbers, Koreans only account for 4.6 percent of the total number of foreign workers in Japan. That is the fifth largest after China, Vietnam, the Philippines and Brazil.

“Those hoping to land jobs in Japan must be fluent in Japanese, though it depends on what work you will be doing, and if you have some IT skills, it will give you advantage,” said Kim.