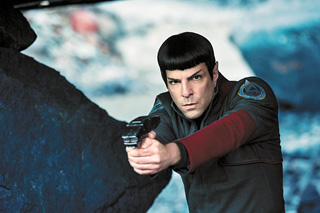 Following “Star Trek” (2009) and “Star Trek Into Darkness” (2013), the original members - Chris Pine as James T. Kirk, Zachary Quinto as Spock, Karl Urban as Leonard McCoy and Zoe Saldana as Uhura - are still flying through space in this sci-fi adventure.

The film has a new director, Justin Lin, who takes the baton from J. J. Abrams, who directed the first two films. It also features new writers, Simon Pegg and Doug Jung.

After a series of dangerous missions, the crew of the USS Enterprise are enjoying a peaceful journey through space. Suddenly, their ship is attacked by unknown evil forces, and the crew are forced to make an emergency landing on an unknown planet. Can they make it out alive?

The film marks one of the final performances of Anton Yelchin, who plays Pavel Chekov, the ship’s main navigator. He died on June 19 at age 27.

The infection may have started in Seoul Station, but in an instant, the zombie virus has spread throughout South Korea and jeopardizes the entire country.

On the day it happened, nobody noticed anything was wrong when a homeless person in the station started acting a bit strange, stumbling and squeaking. Some of the few people that do notice include a runaway girl, her boyfriend and her father, who soon find themselves in the middle of an impossible situation.

The film is the prequel to Korea’s first big-budget zombie movie “Train to Busan,” which was also the first live-action film by director Yeon Sang-ho. “Train to Busan” has sold more than 10 million tickets, so many moviegoers will likely look forward to this latest film, which explains how and why a zombie girl hops on the train headed south.

Yeon tried to make the film as realistic as possible, inviting the audiences to see just how quickly things might go awry in their own everyday lives.

“Seoul Station,” however, doesn’t just show wild action scenes of zombies on the attack; it also poses profound questions for the audience to ponder about problems with society today and the way people relate to one another.

The film has already gained attention around the world, winning the Silver Crow Award at the 2016 Brussels International Fantastic Film Festival.

Ryu Seung-ryong, Shim Eun-kyung and Lee Joon star in the film as the voices. 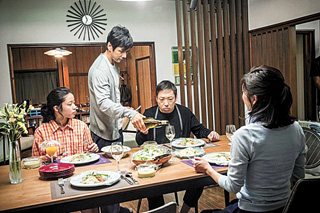 Koichi Takakura (Hidetoshi Nishijima) is a former detective who now teaches criminal psychology at a university. He accepts a request from an old colleague to reexamine an unsolved case of a family that went missing six years ago.

Meanwhile, Takakura and his wife move to a new house, where they encounter a neighbor named Nishino (Teruyuki Kagawa). Something about him nags at Takakura constantly.

One day, Nishino’s daughter, Mio, appears in front of Takakura and makes a shocking confession: Nishino is not her father, and she actually has no idea who he is.

Director Kiyoshi Kurosawa is a well-known maverick in the horror genre who knows how to terrify without excessively relying on sound effects or jump scares. “Tokyo Sonata” (2008), “Sakebi” (2006) and “Cure” (1997) are his most popular films. For “Creepy,” he explores the nature of a psychopath to create a powerful psychological thriller.

The film, which premiered at the 2016 Berlin International Film Festival, is based on a mystery novel of the same name written by Yutaka Maekawa.

Classic films never die, but rather revisit future generations. In this case, the return of “Dead Poets Society” (1989) is helped along by the release of a new remastered version.

“Carpe Diem. Seize the day, boys. Make your lives extraordinary.” John Keating, played by Robin Williams, says this to his students on his first day teaching English at the elite, all-male Welton Academy.

The school consists almost entirely of students from upper-class families. They don’t have their own goals or try to imagine them, and instead strive to be what their parents want them to be. So, when Keating speaks the words out loud, the sentiment inspires the students to venture down a path of self discovery.

Neil Perry, played by Robert Sean Leonard, gets inspired by Keating to restart the “Dead Poets Society,” which the teacher had founded when he was a student at the academy. He does so with Todd Anderson, played by Ethan Hawke. In spite of the strict, oppressive policies of the school, the students gradually discover what life means to them and are forever changed.

The film is well-known for criticizing the education system of the 1950s. The film’s director, Peter Weir examined how students at the time were deprived of freedom in the name of entering a prestigious university, which still resonates today.

Tom Schulman wrote the script based on his own experiences, for which he won the Academy Award for Best Original Screenplay in 1989. 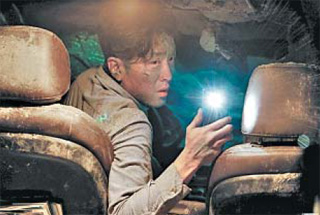 You’re driving home through a tunnel when, suddenly, it collapses around you. You’re trapped - what do you do?

The situation seems realistic enough to send chills up your spine.

Jeong-su (Ha Jung-woo) is a car salesman who has just inked a big deal. With a joyous heart and a birthday cake for his daughter, he drives back home. But after entering a tunnel, it suddenly crumbles. He’s alone, with just a partially charged phone, two water bottles and the cake.

Making matters worse, it may be days before help can arrive. The commander of the rescue team, Dae-gyeong (Oh Dal-su), tries his hardest to enter the tunnel but it looks almost impossible.

Meanwhile, his wife Se-hyun (Bae Doo-na) sends messages of hope to her husband through the radio, which is his only connection with the outside world.

The film suggests that anyone could become Jeong-su in real life, while also displaying a world where everyone is only looking out for themselves. The government is busy covering up the calamity, the media is only thinking about getting the scoop, the construction company is denying its responsibility and people are becoming disinterested as the days pass by. “Tunnel” is different from other disaster films in its narrow focus on a single victim, and it’s clear that director Kim Seong-hun wants audiences to consider the value of a person’s life. 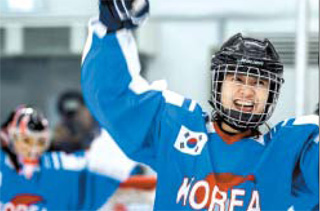 Six totally different players have come together to form Korea’s first women’s national ice hockey team in order to compete in the 2003 Asian Winter Games held in Aomori Prefecture, Japan. Nobody believes they’ll make it to the games, but to the group, the lack of support adds more fuel to the fire.

All have different careers totally unrelated to ice hockey, and even though they don’t harmonize well, they unite for a singular goal: to participate in the games and earn the first medal.

The film is based on a real story, just like the first movie in the series, “Take Off” (2009), which was about ski jumping. The follow-up showcases more active and exciting scenes than the original.

Though there are fictional elements in the movie, as of 2016, the team is still Korea’s only women’s ice hockey squad.

Director Kim Jong-hyun has said the film is focused on portraying the lively, passionate bonds between women. It’s also a touching story of overcoming breathtaking challenges to achieve a dream.