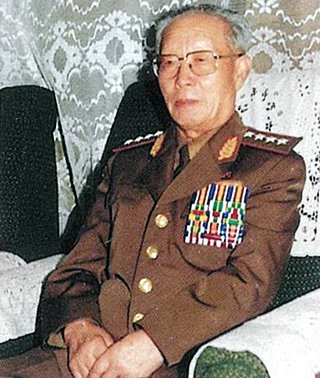 Thae Byong-ryol, named four-star general of the Korean People’s Army in 1992, is said to be the father of Thae Yong-ho, the No. 2 diplomat at the North Korean Embassy in London who defected to South Korea with his family. The elder Thae died in 1997. [JOONGANG ILBO]

Thae Yong-ho, the most senior North Korean official to defect to South Korea in nearly two decades, is the son of Thae Byong-ryol, who fought the Japanese Imperial Army in the 1930s alongside North Korean founder Kim Il Sung, a source on North Korea said.

If Thae, who defected while serving as the No. 2 man in North Korea’s embassy in London, is indeed the son of a comrade-in-arms of the late North Korean founder, he comes from the country’s most privileged class. Thae Byong-ryol held very high-ranking posts within the party and military thanks to his history with the late Kim, even sitting on the central military committee of the Workers’ Party.

“I understand that Thae Yong-ho was born to Thae Byong-ryol, who engaged in anti-Japan guerilla attacks in Manchuria with Kim Il Sung,” said the source, who asked not to be named. “He died in 1997.”

“According to official documents collected by the government, the elder Thae was named a four-star general of the North Korean army,” said a Unification Ministry official Thursday on condition of anonymity. The official said the former four-star general was born in 1916.

If the report is accurate, it will be a huge embarrassment for the Kim Jong-un leadership in Pyongyang and an intelligence bonanza for Seoul. It’s likely that Thae brought with him invaluable intelligence about the Kim leadership. In May 2015, Thae was one of the North Korean minders of Kim Jong-chol, older brother of Kim Jong-un, when he visited London to attend an Eric Clapton concert.

Thae’s wife was identified as O Hye-son, 50. O is reported to be related to O Paek-ryong, also a first-generation guerrilla comrade of Kim Il Sung in the 1930s, who died in 1984 at age 70. The late O’s son, O Kum-chol, is vice chief of the North Korean Army’s General Staff.

The South Korean government declined to confirm whether the reports on Thae’s background are accurate.

Only people who have passed a rigorous vetting process with proven loyalty to the Workers’ Party are dispatched to overseas diplomatic posts.

Seoul views such defections has signs of disunity in the most powerful group in Pyongyang and growing disillusionment felt by North Korean elite in the Kim Jong-un regime.

Prior to Thae’s defection, there have been at least four cases of defections by North Korean diplomatic personnel overseas to South Korea this year, one from Bulgaria, another from Russia and two from southeast Asian nations.

“To become an overseas diplomat, one has to come from a family with proven loyalty to the party and wealth,” said a government official, who asked not to be named. “In short, only the elite are selected. In the past, we had one or no cases of defection by such elite in any given year, but this year alone we have had more than five such defections so far.”

“It is only natural that North Korean diplomats who are exposed to outside information and therefore have the ability to compare North Korea with the South begin longing to live in the South,” said Cheong Seong-chang, a senior fellow at the Sejong Institute, a policy think tank.

“It would be a premature assumption to think the Kim Jong-un regime will be shaken by defections by some elite North Koreans. It still maintains an effective security apparatus that makes it impossible for people to form organized rallies even on a small scale.”

With the government’s announcement Wednesday that the Thaes had arrived in South Korea — without disclosing when or how — reports in and out of the country continued to offer details on their family. 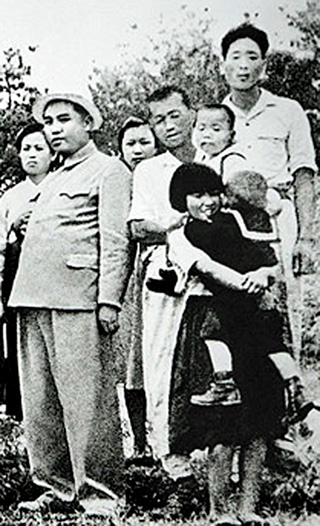 O Paek-ryong, fourth from left, is seen holding a young Kim Jong-il in his arms during a group photo with Kim Il Sung, who stands to his left. O Paek-ryong fought alongside Kim Il Sung against the Japanese army in the 1930s as a guerilla fighter. O Hye-son, the wife of Thae Yong-ho, is reportedly related to O Paek-ryong, who later took high-ranking positions in the military until his death in 1984. [JOONGANG ILBO]

According to the Guardian newspaper, Thae’s second son, identified as Thae Kum-hyok, was enrolled at a public high school in Acton, west London, and was to attend Imperial College London for his first semester this fall. His friends describe him as a “brain,” who enjoyed basketball, the Guardian reported.

Thae’s oldest son, who is reportedly 26 years old, has a bachelor’s degree in public health economics and his dissertation was on the need for Pyongyang to have more disabled parking spaces for it to become a global city.

Thae is also said to have a daughter, presumably the couple’s youngest child, but no information about her has been disclosed. The Unification Ministry remained tight-lipped on Thae’s family. It’s possible that Thae decided to defect for the sake of his children, who may have become accustomed to Western freedoms after living in London and Denmark for more than ten years. British broadcaster BBC reported that Thae was due to be sent back to Pyongyang this summer.

The government neither confirmed nor denied that report. But a government official acknowledged Thursday that an increasing number of senior North Korean officials are opting for defection to pursue better lives, in contrast to the past when many chose to defect to avoid political persecution.

The official went on to describe “immigration-type defections,” in which highly educated North Koreans from the elite class defect to the South to avoid returning to more restricted lives in Pyongyang.

While Thae is considered to be the highest diplomatic official ever to defect, the South Korean government views Hwang Jang-yop as the most senior defector.

Hwang, an architect of the North’s Juche Ideology and former president of Kim Il Sung University — and mentor of former North Korean leader Kim Jong-il — infuriated Pyongyang when he defected in 1997.

Incensed at his former tutor, Kim Jong-il, the father of current leader Kim Jong-un, dispatched an assassination squad to the South to target him, although it didn’t succeed. Hwang died in 2010 at age 87 of natural causes.