Moon says he will cooperate to defeat the Saenuri Party

Moon says he will cooperate to defeat the Saenuri Party 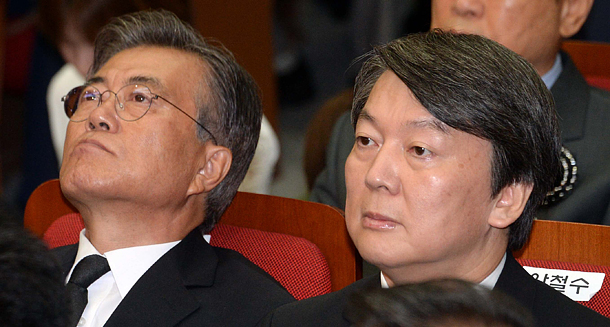 Moon Jae-in, left, leader of the largest faction in the Minjoo Party of Korea, and Ahn Cheol-soo, right, former chairman of the People’s Party, sit at the memorial service of the 7th anniversary of the death of former President Kim Dae-jung at the National Cemetery in Seoul on Thursday. [JOINT PRESS CORPS]

Moon Jae-in, former presidential contender for the main liberal opposition party, said Thursday that he will cooperate with Ahn Cheol-soo, former chairman of the People’s Party, to defeat the conservative ruling Saenuri Party in the next presidential election.

High-profile politicians gathered at the memorial service of the 7th anniversary of the death of former President Kim Dae-jung at the National Cemetery on Thursday.

Among them were Moon and Ahn, who once competed against each other in the 2012 presidential race. Ahn quit on the eve of the election and endorsed Moon.

After being outmaneuvered by Moon in negotiations over one of them bowing out, Ahn angrily walked away, giving a lukewarm endorsement of his competitor to unite liberal votes. Moon was narrowly defeated by President Park Geun-hye.

In 2014, Ahn abandoned his first attempt to launch a new political party and joined Moon’s party.

However, Ahn left the party at the end of last year, following a feud with Moon and his faction. In February, Ahn formally launched the People’s Party, rejected the Minjoo Party’s proposal for a merger, operated his own campaign and scored a stunning victory in the general election on April 13.

“In the general election, the opposition parties competed against each other, but I believe we will be united for the next presidential election,” Moon said. Asked if he will talk to Ahn about the strategy, Moon stressed again that, “I can assure you with confidence that we will put our powers together, no matter the direction it takes.”

Ahn did not give a direct response to Moon’s remark but commented that he misses the late President Kim’s wisdom, as the country is now in a serious crisis.

During the event, Moon and Ahn sat next to each other. They also shook hands and welcomed each other when they met at the waiting room before the memorial.

Moon, however, was cold toward Kim Chong-in, acting chairman of the Minjoo Party. Kim is a strategist invited by Moon to oversee the party’s general election campaign, but their relationship quickly turned sour as Kim stayed on to control the party, while Moon supporters wanted to push him out.