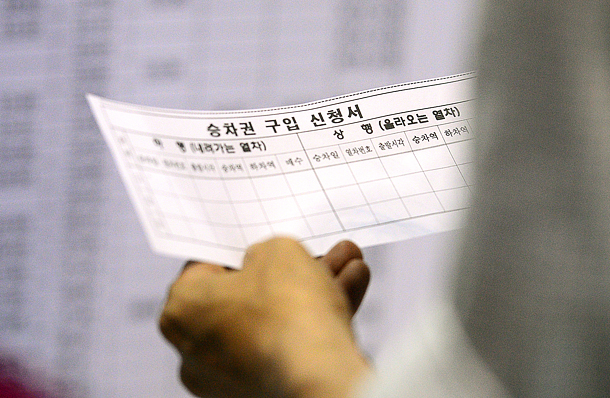 A man holds a train ticket purchase application form at Seoul Station on Thursday to buy homecoming KTX tickets for Chuseok holidays in advance. While many people come to the station to purchase tickets, some wait in lines to purchase tickets and then resell them on black markets at higher prices. [NEWSIS]

With the fast approach of Chuseok, a Korean national holiday similar to Thanksgiving, the black market for train tickets is emerging once again.

“It’s a quick way to earn side money,” says a 24-year-old student, surnamed Kim, of Hanyang University, who with four of his friends bought train tickets online in order to sell them at higher prices in the black market.

The state-run rail operator Korean Rail Corporation (Korail) opened the online and at-the-station sale of tickets on Wednesday and Thursday for those looking to travel during the Chuseok holiday, which falls between Sept. 14 and 16 this year.

At-the-stations ticket sales for the Gyeongbu Line began at 9 a.m. on Wednesday.

Tickets sold out within 20 minutes. Korail’s records show that as many as 290,000 people were buying tickets online at one point that day.

Along with the official ticket sales, black marketers flooded online communities with the sale of tickets. Naver’s popular second-hand online market, Joonggonara, saw more than 70 posts by people trying to buy or sell train tickets from Wednesday to Thursday.

People even asked for money up front.

“You don’t have the time to stand in line or wait online to battle to get tickets,” said someone with the username wwr8972 on a blog in Naver on Wednesday. “Why don’t I buy the ticket for you? You can pay me 10,000 won extra for that.”

“I know it’s illegal,” said Kim Sang-hyeong, a 33-year-old office worker, “but I have to go home to Busan during the holiday, and I just don’t have the time for a mouse-clicking battle online.”

He added, “The extra 30,000 won I pay these people who buy the tickets for me is not much when I think about the hassle they saved me from.”

While it is illegal to buy tickets and sell them at higher prices, these so-called ticket hustlers have long been in Korea.

“They were there when I was in my 20s,” said Lee Jong-hyang, a mother of three children who is in her mid-50s.

“These people buy movie tickets and train tickets in advance, make them all sell out, and sell them to those waiting in lines at the theaters and train stations at a higher price.”

Part of the reason for their continued existence (and success) in the country may be that cancellation fees have never been very high, which means hustlers can buy tickets at low risk of losing money.

Korail charges nothing if customers cancel up to a day before the ride. It charges only 400 won if passengers cancel on the day of the ride, up to an hour before the train schedule.

“Our ticket prices range from 3,000 won to 45,000 won,” said Park Byeong-nam, a Korail employee of the company’s PR department. “The Seoul-to-Gwangmyeong one-way ride being the cheapest, and the one-way ride from Seoul to Busan being the most expensive.”

Given these prices, passengers will be charged from 400 won to a bit over 4,500 won for canceling their trips on the day of the ride.

Cancellation fees for train tickets in other countries are much higher. Deutsche Bahn railway company in Germany, for example, charges 17.50 euros ($19.80) for passengers who cancel tickets purchased online.

The United States’ Amtrak charges 10 to 20 percent of the ticket price as a cancellation fee. Given that their one-way tickets cost something between $50 to over $200, depending on the travel distance and dates, their refund fees will still cost more than most of Korail’s refund fees.

“We have no plans to increase the refund fee,” Park said. “I am sure authorities can investigate illegal sales online and such, but there isn’t much Korail can do since it’s not a law enforcement body.”