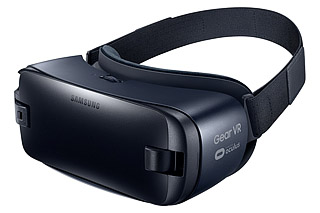 Samsung Electronics has again thrown down the gauntlet in the competitive virtual reality gadget market.

The world’s largest semiconductor company released its newest version of their VR headset, Gear VR, on Friday in 10 countries, with subtle changes that are poised to make the users’ experience more immersive and user-friendly.

Yet the price tag remained the same, with the previous version at 129,800 won ($116) per unit or $99.99 in the United States. Samsung Electronics spokesperson explained the decision to maintain the same price is part of a strategy to help make VR gadgets, which have been receiving attention mostly from tech-savvy consumers, more widely distributed.

The first noticeable change is the expansion of the lens’ diameter from 38mm to 42 mm (1.5 to 1.65 inches). The viewing angle is also increased from 96 to 101 degrees, which is expected to give users a wider view.

Also, Samsung changed the color from white to dark blue, both inside and out, so that any reflected light, which hinders a full-fledged immersive experience, can be minimized.

From an operational perspective, the new Gear VR is manufactured to be compatible with Samsung Electronics’ other newborn device, the Galaxy Note 7, also released on Friday.

But a separate micro USB included in the package will make the gadget easier to connect with other Galaxy’s previous smartphones including the Galaxy Note 5, Galaxy S7 Edge, Galaxy S7, S6 and S6 Edge. An extra USB port on the outside will also enable the goggles to connect with external devices in order to watch, for example, a movie or drama saved on a personal USB. An additional “Home” button has been added on one side of the device so that it is now easier to exit the currently playing program to pick another one.

In addition, Samsung Electronics pledged to make more VR-dedicated devices in partnership with Oculus, a VR developer that Samsung has been collaborating with since 2015.

“We are expanding our content infrastructure so that Gear VR users can have a more enjoyable experience,” said the IT company in a press release.

Samsung Electronics said when it launches a new “Samsung VR” app, which is going to provide 360-degree video content, Gear VR users will then have more options.

“The hardware and software for the latest Gear VR have both improved under the objective of giving an enhanced immersive VR experience to viewers,” said Samsung Electronics spokesperson.