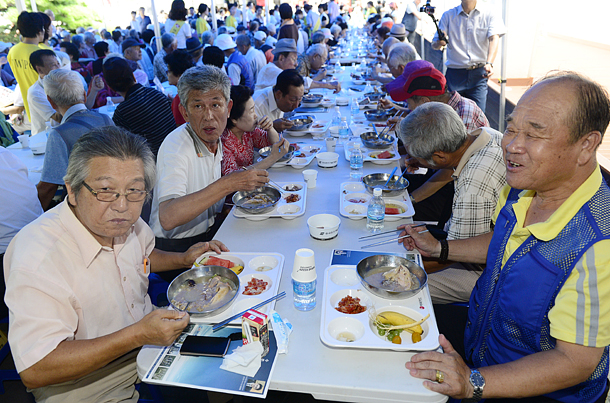 This summer has been exceptionally hot, but some senior citizens have regained their strength with a free bowl of samgyetang (Korean chicken ginseng soup).

Celebrating malbok (the last of the three hottest days of the year in the lunar calendar), the Food With Love Mission, a private nonprofit organization, held its first nationwide event providing free samgyetang to senior adults on Tuesday. The event was held simultaneously in 200 places across the nation, including the yard by the main building of the National Assembly in Yeouido, western Seoul. Senior adults who lived alone were invited.

More than 1,000 people came to Yeouido to participate in the event, and over 120 volunteer workers showed up to help out. Organizers said it was twice as many workers as expected.

“I headed out of my house at 4 a.m. with my two daughters,” said Yoon Yeo-suk, 55, a volunteer. “I couldn’t imagine how hard it would be for the elderly to get through this extreme heat, so I decided to help out.” In Yeouido, while the volunteers cooked about 1,000 servings of samgyetang, special performances such as musical concerts and poem recitals were held on the sidelines. 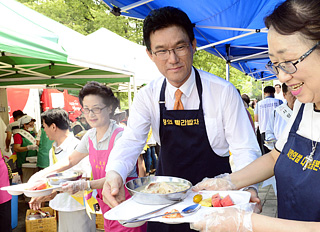 After the meal, the hosts handed out gifts of cup noodles and soy milk.

“I found out about the event through a makeshift outdoor kitchen in Jongno District providing free meals,” said Je Young-ho, 74. “It was a terrific summer getaway. I had a nice meal and met new people.”

The organization has been holding free samgyetang events since 2007 in Seoul, Incheon and other metropolitan cities. This year was the first time the event was held nationwide.

“We were able to hold the event successfully thanks to the love and passion everyone showed us over the past 10 years,” said Lee Seon-ku, chief director of the Food With Love Mission. “I hope this event can one day become held across a unified Korea.”

“We have been preparing for this event since last year,” said Ryu Jin-hyeon, chairman of Kseung Construction Energy Company, who funded the event. “We hope the participants have gained lots of energy.”