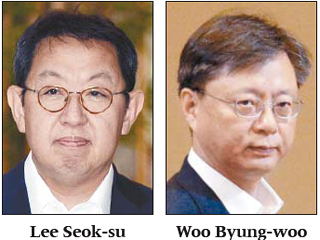 The Blue House launched an extraordinarily strong attack on Friday against the independent inspector general over an alleged leak of details of his investigation into a scandal-plagued senior aide to President Park Geun-hye.

Following a series of corruption and power abuse allegations, Woo Byung-woo, senior civil affairs secretary to the president, has become the first target of an investigation by special inspector general Lee Seok-su, under a newly established system to root out irregularities among high-ranking officials. The probe concluded Thursday, a single day short of its mandate, with Woo facing allegations of embezzlement and abuse of authority. Lee asked the prosecution to pick up the case and continue investigating Woo.

The conclusion also came after MBC reported that a newspaper journalist’s briefing to an editor about his telephone conversation with Lee was leaked through social media.

Based on the leak, the TV network said the inspector appears to have hinted at the probe’s outlook to the journalist. Lee allegedly said he would send Woo’s case to prosecutors for further investigation after meeting his deadline this week. Lee also mentioned the scope of his probe to the journalist.

“If the media report is true, special inspector general Lee told a newspaper about his probe and said he would ask the prosecution to investigate Woo regardless of the outcome of his probe, and that was realized,” Kim Sung-woo, senior presidential secretary for public affairs, said Friday. “It is a grave violation of the law and such a behavior is intolerable. Lee must lay bare whom he contacted and what his intention was.”

Kim also demanded that the alleged leak by Lee must be investigated. “Leaking information about an ongoing probe to the media and exchanging opinions with it is a serious violation of the law that shows he gave up his duty as an independent inspector,” Kim said. “It is an unacceptable act and an investigation must take place to prevent a recurrence of any act that undermines the discipline of the country.”

In the sternly worded statement, Kim also quoted the law governing the independent inspection that a special inspector who leaks information regarding an ongoing probe is punishable with up to five years in prison or a five-year suspension from his job.

Kim also stressed that his statement is the official position of the Blue House.

“President Park thinks the leak is an extremely serious matter,” a presidential aide told the JoongAng Ilbo. “Park thinks it is impossible to run the country normally if the special inspector colludes with the media and undermines the Blue House with unconfirmed information.”

Another Park aide said the conversation between Lee and the journalist showed that Lee launched the inspection with suspicious intentions.

The system is supposed to improve transparency and reduce corruption by monitoring and investigating possible irregularities by the president’s family and senior government officials, and Woo became the first target.

Lee filed for annual leave and did not come to his office on Friday. He did not respond to the Blue House’s statement.

The Blue House made no mention of Woo’s fate on Friday, making clear that he won’t be dismissed, although he will have to face prosecutorial investigation. “Park appeared to think that she will quickly be reduced to a lame duck if she loses control of the Woo crisis,” a Park loyalist from the ruling Saenuri Party told the JoongAng Ilbo.

Park’s confidence in Woo was demonstrated earlier this week when she did not replace Woo during a reshuffle. Woo, who has pleaded his innocence over corruption allegations, also said last month that he has no intention to step down to take “political responsibility.”

The ruling and opposition parties, however, demanded Woo’s resignation. Rep. Chung Jin-suk, floor leader of the ruling Saenuri Party, said Woo should consider the burden that he puts on the president and the administration and step down from the post. It is more appropriate for him to plea his innocence without the Blue House title, Chung said. The main opposition Minjoo Party of Korea also made another demand to Park to fire Woo.

“The situation has become pitiful now,” said Rep. Woo Sang-ho, floor leader of the Minjoo Party. “The president should recommend Woo resign and face the investigation fair and square.”

Rep. Ki Dong-min, spokesman of the party, said the Blue House was issuing an order to the prosecution while denying the independent inspection system. “It seems like a ridiculous soap opera,” he said. “It was doubtful if the prosecution, filled with Woo followers, could proceed with a fair investigation. Now the Blue House issued the guideline and we don’t even have to see for the conclusion of the prosecutors.”