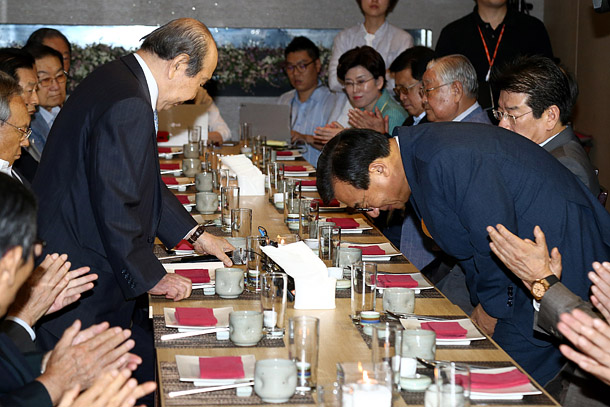 The new chairman of the ruling party faced increasing complaints from party members for his conspicuously enthusiastic support of the Blue House after less than 10 days on the job.

The Saenuri Party elected Rep. Lee Jung-hyun, a close ally of President Park Geun-hye, as its new chairman on Aug. 9. Since 2004, Lee has served as Park’s mouthpiece and as the president’s political senior secretary and public affairs senior secretary since Park took office in 2013.

On his first day of the job, Lee promised an amicable relationship with the Blue House.

“If you think resisting the president and government is justice, then you are unfit to be a ruling party lawmaker,” he said. Lee also said he will directly communicate with the president, who is often criticized as being high-handed and stubborn, bragging about his 13 years of political partnership with her.

He also said resolving the pending issues by supporting the president is more urgent than the party’s preparation for the next presidential election.

Since then, he has continued to give the Blue House his unwavering support.

“I will be entirely in charge of consultation with the Blue House, and other officials should focus on communicating with government ministries and listening to public opinions,” a party official quoted Lee as saying to senior party members including Rep. Kim Gwang-lim, chief policymaker.

“Lee appeared to be showing off his confidence,” said the source, “that he could take care of the party-Blue House relationship since he served in the Blue House as a senior political and public affairs secretary.”

Lee also made dozens of calls a day to Kim Jae-won, senior presidential secretary for political affairs, the source said, adding that he called dozens of other Blue House officials since becoming the chairman, all in order to understand the pending issues.

“This is an extraordinary way of communication that only Lee can do,” said Rep. Yoon Young-seok, Lee’s chief of staff, “since he despises protocol and authority.”

Lee also did not hesitate to defend the president even when his request was snubbed.

Park carried out a minor reshuffling of her cabinet on Tuesday, naming three new ministers while keeping an embattled veterans affairs minister and a scandal-plagued senior civil affairs secretary. Park rejected a plea from Lee to hire more officials from the Jeolla and Gwangju region in the reshuffle.

The next day, Lee commented on the reshuffle as if he were the presidential spokesman, although his request as the new ruling party chairman was clearly snubbed.

“It was focused on stability of the state affairs,” Lee said, adding that the shake-up would also bring about changes to the government. Asked about Park’s snub of his request, Lee said, “When I made the request to the Blue House, the vetting process had probably already ended. Appointing ministers is the president’s prerogative, and it cannot satisfy everyone.”

Lee, however, remained silent about growing demands from the party that Park must decide the fate of the scandal-ridden civil affairs aide Woo Byung-woo as soon as possible.

Park adversaries complained that their new chairman is acting as if he was a Blue House secretary. “His request for more balanced appointments was not accepted in the reshuffle, but he still said it was a positive change in the cabinet,” Rep. Choung Byoung-gug said. “The people will see him as a yes-man. It’s far from what the public showed it wants in the general election - that the party should have more horizontal ties with the Blue House.”

Another Park adversary also said he was pessimistic about the president’s intention to mend the factional split in the ruling party. “When the president invited the new leadership to a luncheon last week,” he said, “Chief of Staff Lee Won-jong said ‘I have never seen the president laughter so much before today.’ And I thought the Blue House had no intention to work for reconciliation of the party.”

Lee, however, told the JoongAng Ilbo that he does not care about such criticism. “I will not respond to every single criticism,” he said. “I will continue making recommendations to the president about balanced appointments, because that is my job. And I will produce successful accomplishments by creating effective policies.”