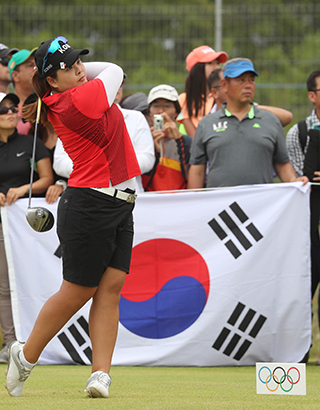 Park In-bee tees off during the women's golf tournament at this year's Olympics in Rio de Janeiro, Brazil. Park shot 16-under to take home gold, adding another accolade to her already decorated list. [NEWSIS]

Amid windy conditions on Saturday during the final round of the women’s tournament at the Olympic Golf Course in Rio, Park shot five-under 66 to aggregate 16-under 268 for the entire tournament. Park finished five strokes clear of runner-up Lydia Ko of New Zealand, who shot two-under 69 for a four-day total of 11-under.

Ko, who struggled early in the tournament, quickly climbed up the leaderboard during the third round, shooting a rare hole-in-one along the way. By the end of the third round, Ko, who is ranked No. 1 in the world according to the Rolex World Rankings, was only two shots behind Park.

The final day was projected to be a fight between Park and Ko. The two are considered the best golfers in the world at the moment, but during the season, they never had a proper chance to face off as Park struggled with nagging injuries throughout. The Olympics turned out to be a perfect opportunity and the matchup garnered much attention before tee off.

The battle was framed as one of experience versus ambition. Park, 28, is a veteran who has spent a decade in the LPGA, while Ko, 19, is already in her fourth year on the U.S.-based tour.

At the end of the day, it was the Korean hall of famer that emerged smiling while Ko settled for silver. China’s Feng Shanshan took home bronze, one stroke behind Ko at 10-under.

Other Korean golfers, who had hoped for a podium sweep, missed out with Amy Yang finishing tied for fourth, Chun In-gee tied for 13th and Kim Sei-young tied for 25th.