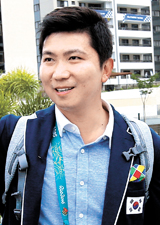 Ryu Seung-min, a table tennis player and gold medalist from the 2004 Summer Games in Athens, won his bid to become a member of International Olympic Committee (IOC)’s Athletes Commission, a feat as unexpected and remarkable as his run to the top of the podium 12 years ago.

In the ballot result announced by the IOC last week, Ryu was selected as one of the four members of the commission. He was second in the number of votes cast with 1,544, behind former German fencer Britta Heidemann who received a total 1,603 votes. Daniel Gyurta of Hungary, a former swimmer, placed third with 1,469 votes and Russian Yelena Isinbayeva, a pole vaulter, was fourth with 1,365 votes.

This was a remarkable achievement considering he was relatively unknown among the 23 candidates.

Ryu is the second Korean to be elected to the commission after Moon Dae-sung, a gold medalist in taekwondo during the 2004 Olympics. Moon served as a member of the commission from August 2008 through this year.

The Athletes’ Commission is comprised of 12 former and current athletes, eight Winter Games and four Summer Games, and “serves as a link between athletes and the IOC… advises the IOC Session, the IOC Executive Board (EB) and the IOC President on matters concerning athletes,” according to the IOC.

The elected four including Ryu will serve until the 2024 Summer Games.

“I had no time to relax for a while,” said Ryu during an interview with the JoongAng Ilbo, an affiliate of the Korea JoongAng Daily, after his election was confirmed. “Now with the good result, I think I can relax a little bit.”

The process was not easy for Ryu. During the screening by the Korean Olympic Committee, he was selected over shooter Jin Jong-oh and weight lifter Jang Mi-ran, despite the fact the athletes were more popular than Ryu. Even after he was selected as a final-23 candidate, no one thought he would actually gain a seat, largely because he was not as well known as other athletes like Isinbayeva.

“Whenever someone doubted me, I would think to myself, ‘Just give it a go,’” said Ryu.

From July 24 to Aug. 17, he ran around meeting with athletes at the Athletes’ Village in Rio, spending about 15 hours a day for his campaign. In total, he met with more than 20,000 different athletes from around the world.

His effort even gained attention from North Korean athletes, who later told Ryu that he’d gotten their votes.

With Moon suspended due to allegations of plagiarism on his doctoral thesis and Samsung Group Chairman Lee Kun-hee, an IOC member, in ailing health, Korea had no one to represent the nation during the Rio Games.

However, with Ryu’s election, Korea will now have a voice during the upcoming 2018 Pyeongchang Olympics, and the athlete has expressed his intention to further his ability to advocate for his country.

“My goal is to help athletes around the world gain opportunities without discrimination,” Ryu added. “But once my term in the commission ends, I would like to run for membership in the IOC.