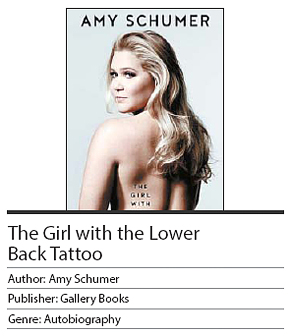 Amy Schumer is a powerhouse in the entertainment industry, thanks to her Emmy-winning TV series, “Inside Amy Schumer,” and feature film box-office smash “Trainwreck.” A comedian, actress, writer, producer and director, Schumer is on her way to adding “best-selling author” to her list of achievements with her new book, “The Girl with the Lower Back Tattoo.”

Schumer is a talented storyteller. She’s known for standing in a spotlight and sharing every corner of her soul with thousands of strangers. So it’s no surprise that her book is packed with hilarious, honest and often vulnerably raw details of her life. Her self-deprecating essays reveal a young Amy navigating the tricky waters of adolescence, including new love, lost friendships and the accidental discovery of what the naked body of an older woman looks like up close and personal.

Readers also get a peek inside Schumer’s “new money” world. She starts by chronicling the better part of a decade when she hustled comedy clubs for work in order to make a name for herself. She notes that her achievements are the result of hard work, never passing up an opportunity to get on a stage, and the ability to poke fun at herself.

Schumer writes that life isn’t all butterflies and rainbows. She’s been the subject of emotional and physical abuse. Her parents’ divorce was painful. Her father suffers from a debilitating disease. And she’ll never forget the night when two young women were killed in a shooting while watching her movie at a theater. She’s now an advocate for domestic abuse and gun violence awareness. Through all the pain, she’s used each experience to grow into the version of herself she’s supposed to be.

Readers will laugh and cry, and may put the book down from moments of honesty that result in uncomfortable realistic details from her life. More important, the essays challenge readers to harness their own stories and rest in the fact that they’re good enough. Be bold. Love your body. It’s OK to fail and make mistakes. And lower-back tattoos can only make you stronger.