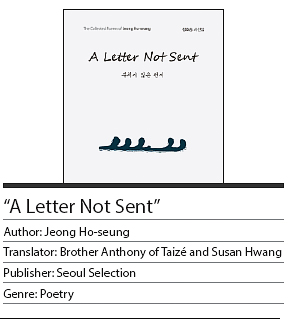 With his understated way of writing, poet Jeong Ho-seung offers consoling words for those going through hard times.

And now, readers around the world can access that support. Two hundred and twenty of Jeong’s poems have been co-translated by An Son-jae, a professor emeritus in English literature at Sogang University who also goes by Brother Anthony of Taize, and Susan Hwang in a series of two books.

One was published in July and the other will be released this September.

“A Letter Not Sent,” the first book, contains 108 of Jeong’s most beloved poems including “From Sorrow to Joy,” “A Letter Not Sent,” “A Blind Couple Singing,” “On Leaving Sabuk” and many more. The book also offers the poems in the original Korean, which makes it possible for readers to explore their beauty in both languages.

Still, it’s no easy task to translate Jeong, who tasked himself with shedding light on the full depth of human emotion.

“Better a live sparrow than a stuffed eagle,” is a quote by Omar Khayyam, a Persian poet, writer, philosopher and a mathematician that Prof. An keeps in mind while translating, he told the Korea JoongAng Daily in an interview late last month, referring to the cautious way he works.

However, he said his ultimate goal was to “convey the message and language Jeong wanted to deliver” while making it excellent literature, even in English.

An has been translating Korean literature, mainly poetry, for the past 26 years.