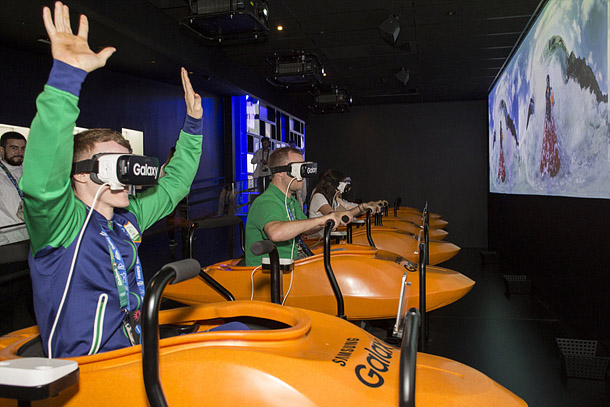 Irish gymnast Kieran Behan, left, enjoying his time while riding on a 4-D rollercoster ride at Samsung Electronics’ Galaxy Studio VR station set up at the Rio de Janeiro Olympic Park where the summer Olympics is coming to an end this week. [SAMSUNG ELECTRONICS]

The government plans on creating a 40 billion won ($35.8 million) fund to exclusively invest in the development of virtual reality (VR) and augmented reality (AR).

The Ministry of Science, ICT and Future Planning on Sunday said the fund, which will be managed for seven years will be investing in VR and AR companies that develop games, theme parks and educational resources. It be used to finance companies that developing primary source technologies and also companies involved in marketing.

“In order to secure a lead in the global VR market, we need to execute various policies including the setting up of a VR fund as well as providing tax benefits and create a VR cluster,” said Choi Jae-yoo, second vice-minister of science, ICT and future planning on Friday, when government officials met with start-up executives and tech experts at the newly opened start-up IR center at the Korea Development Bank’s headquarters in Yeouido Seoul. “Our goal is to create 50 companies with VR expertise by 2020.”

Choi added that the government will consider numerous policies to contribute to creating a positive ecosystem where start-up investment will lead to higher investment returns that will create new start-ups in a so-called virtuous cycle.

The decision to create an exclusive VR and AR fund came a week after the government named VR and AR as one of nine promising technologies during a policy meeting with President Park Geun-hye. Other industries on the list were autonomous vehicles and artificial intelligence. They are all supposed to help Korea’s growth including exports.

During the meeting Park stressed the importance of VR and AR development citing the global phenomenon created Pokemon Go.

Some of the participants at Friday’s meeting said the government should come up with clear guidelines as to which companies will be eligible for the fund’s investments. Others said that to attract more private investors to participate in the fund the government needs to offer incentives or lower the investment requirement barriers.

“VC (venture capitalists) should focus on future values such as long-term performance targets of the start-ups instead of their current balance sheet when deciding on an investment candidate,” said Lee Jong-chan, CEO of Motion Device, a VR game developer.