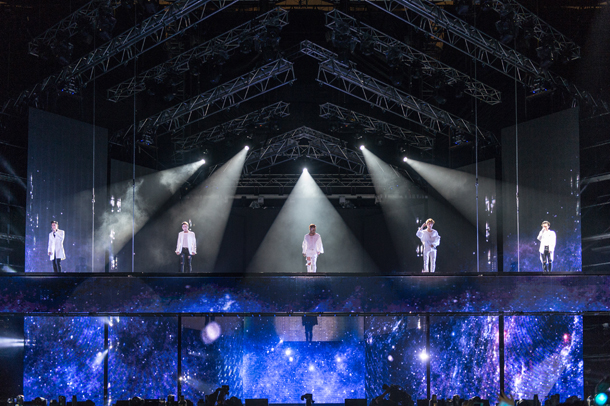 K-pop boy group Big Bang made Korean history Saturday night, with their 10th anniversary concert drawing a crowd of 65,000 - the largest ever at a single music event.

Even the sweltering weather couldn’t stop fans from attending the show, titled “0. to. 10”, at World Cup Stadium in Sangam-dong, western Seoul. Many in the crowd even sang acapella renditions of the group’s songs as they waited for the evening to start.

The five-member group opened the show with “My Heaven” and continued for about three hours, performing 22 songs.

Between songs, the group expressed its gratitude to the fans who filled the gigantic football stadium.

“I was concerned [about this concert] because we’ve been performing a lot overseas,” said G-Dragon, a member of the group. “But now I realize we’re popular here, too.”

The large crowd also came as a surprise to member Taeyang. “I didn’t really expect to see this huge of a crowd,” he said. “We should have done this concert for two days.”

Singer-rapper Psy also made a guest appearance at the show.

Both Big Bang and Psy belong to YG Entertainment.

“I remember Big Bang just did their first performance for TV when I was promoting ‘Celebrity’ in 2006 and Yang Hyun-suk [the head of YG Entertainment] told me, ‘You need to keep an eye on them because they are going to kill everybody,’ and they really made it,” Psy said during the concert.

Big Bang first broke into the music scene in 2006.

Since then, the five members have been performing as a whole as well as in spin-off groups. G-Dragon and Taeyang, for example, released a digital single in 2014, and G-Dragon and T.O.P released an album in 2010. Daesung has also released a couple of solo songs.

Apart from the anniversary concert, Big Bang is celebrating its 10th year in various ways. In June, the group released a documentary film, “Big Bang Made,” in theaters nationwide and are currently holding an exhibition titled “The Exhibition: A to Z” at a gallery in Seongsu-dong, eastern Seoul until October.

Since the majority of Big Bang’s members are in their late 20s, they will likely enlist in the army starting in the second half of this year.

Meanwhile, it has been reported that YG Entertainment has reaped nearly 10 billion won ($8.9 million) from Saturday’s concert.