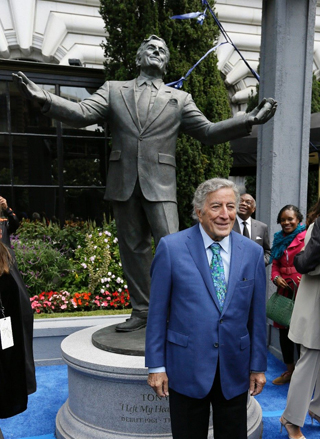 SAN FRANCISCO - If ever there was a man worthy of a grand birthday bash in San Francisco, it had to be Tony Bennett.

And that is exactly what happened Friday.

After the speeches, the music and the praise for the legendary crooner, hundreds of people watched as an 8-foot-tall bronze statue of Bennett was unveiled outside the Fairmont Hotel, where he first sang “I Left My Heart in San Francisco” in 1961.

“I can’t get over what just happened,” said Bennett, who turned 90 earlier this month. “That’s the most beautiful statue I have ever seen. It will live in my heart forever. Thank you for being so wonderful to me. I’ll never forget this day.”

Bennett looked sharp in a blue suit but said only a few words and didn’t sing. That was OK with the crowd; they were just happy to see him.

“He’s San Francisco,” said Marty Jewett, standing in the front row with her friend, also a huge Bennett fan. “I think he keeps all the generations within his repertoire. I love his voice and his longevity.”

For as long as anyone can remember, the New Yorker has been giving to San Francisco. Now, the city has paid him back, with Mayor Ed Lee declaring Aug. 19 to be Tony Bennett Day.

“Tony Bennett, you’ve helped us share the magic of San Francisco around the world,” Lee said.

The celebration will continue at AT&T Park, where the San Francisco Giants will honor Bennett in a pregame ceremony and throughout the game. Bennett also will perform “I Left My Heart in San Francisco” for fans.

“Tony, you are royalty,” said Larry Baer, the chief executive officer of the San Francisco Giants. “We look forward to tonight at the ballpark when we’ll have a small group of 41,000 people singing Happy Birthday to you.”

The theme of the day was how Bennett has always been there for the city by the Bay.

“When the cable cars broke down and were closed down for two years and we brought them back, he came,” said Charlotte Mailliard Shultz, the chief of protocol for San Francisco and the state of California. “When we had the earthquake and we put the Bay Bridge back together, he came. He’s always here for us so we thought, ‘What can we do for him?’ And we thought of the statue.”

In addition to the fanfare Friday and a gala dinner Saturday, Bennett is getting his own ice cream flavor. Created by the city’s Humphry Slocombe ice cream shop, the flavor “Duet” will feature vanilla ice cream swirled with limoncello sorbet and fennel biscotti to honor Bennett’s Italian heritage.