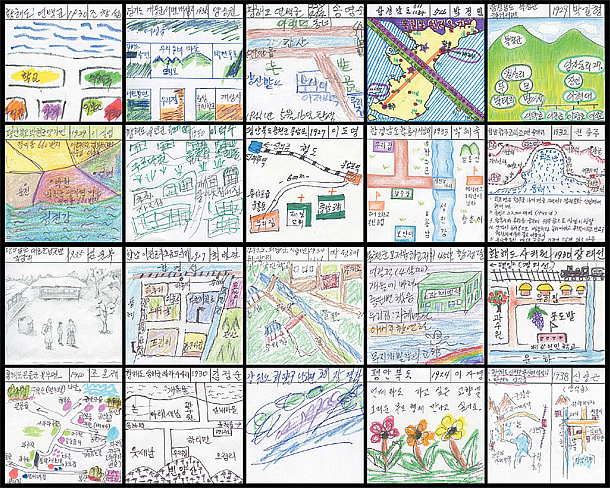 Drawings by Koreans originally from the North who were displaced during the 1950-53 Korean War. [KANG IK-JOONG]

Kang Ik-joong is often called the “3-by-3 inch artist” because of his preference for small canvases.

Based in New York, the 56-year-old artist almost exclusively uses canvas squares that are about 7.6 centimeters (3 inches) long, or about the size of an adult hand. He then installs them on a wall in a series.

In the past, Kang would ask children to draw on the squares. These days, however, he’s more interested in people from North Korea who fled south during the 1950-53 Korean War. Though they hoped to one day return, that became impossible after the borders closed. The displaced, who are mostly in their 70s and 80s, still miss their homes and families.

The artist started visiting these people earlier this year with the Institute for Unification Education, a state-run organization affiliated with the Ministry of Unification, and has been asking them to draw their homes in the North on his signature canvases.

Left: An installation by Korean artist Kang Ik-joong consisting of 1,392 moon jars, a type of traditional Korean white porcelain. The number comes from the year the Joseon Dynasty (1392-1910) began. Right: The artist poses for a photo in front of a sketch of his installation “Floating Dreams,” which will go up on the Thames River during the annual art festival Totally Thames kicking off next month in London. [KANG IK-JOONG]

Kang has since collected 15,000 drawings, which were installed at the Odusan Unification Observatory, located in Paju, Gyeonggi, on Aug. 15 to celebrate Liberation Day, which marks the end of Japan’s colonization of Korea.

Of the drawings on display, 500 will be shown on the Thames River in London for the entirety of September as the centerpiece of Totally Thames, one of the United Kingdom’s major cultural events, which is celebrating its 20th anniversary.

About 200 artists from around the world have been invited to show their work and up to 10 million people are expected to visit the festival.

This is the first time a Korean artist has been at the center of the annual festival. Kang is also the only artist this year who has installed his work on the Thames River itself.

This year’s festival is themed around rivers and features about 150 art installations, said Adrians Evans, the founder and director of the festival, when he visited Seoul last month.

During the festival, Kang will also get a solo show at Robilant & Voena Gallery in London.

The 500 drawings have been reprinted on pieces of hanji, or traditional Korean paper, that is 70 centimeters by 70 centimeters. The prints are then made into a lantern that’s three stories tall, which will then float on the Thames River.

The piece by Kang is titled “Floating Dreams.”

In order to hear more about the project, JoongAng Sunday recently caught up with Kang, who was visiting Seoul. Here are edited excerpts.

Q. You’ve been making installations using children’s drawings so far. Is there any specific reason for that?

Why did you change from children’s drawings to the works of the displaced?

I first heard the story of the three-year-old Syrian refugee who found on the shore of Turkey around the time I received the offer [to make something] from Totally Thames. I tried to create a piece based on the story of the little child refugee but it didn’t feel right because I thought to myself, “My grandfather was also a refugee.” And that was the moment I began to think about the issue of the displaced people and trying to develop that into a global issue.

How did you develop that idea into an art piece?

Looking at the Thames River, which divides London between the north and south, it reminded me of the Imjin River [that bisects the Korean Peninsula and divides South and North Korea]. And then I realized the Thames River is not dividing the city but rather connecting its two halves. Those who were displaced during the Korean War are refugees, after all, and the Imjin River and the Thames River connect to each other [in that they both reach the sea]. And then I came to the conclusion that I need to make some thing that would contribute to world peace.

How did you ask the displaced to be part of the project?

I asked them to draw their home, in which they frolicked when they were young. Most of them were hesitant to draw in the beginning but they all eventually got into the work, and everyone cried by the end. It seemed like they revisited their childhood days as they worked on the drawings. I first approached the topic of the displaced as just an idea [for a piece of art] but I regretted thinking that way later.

Many of the drawings are impressive and interesting.

One of them just drew a single rainbow. I asked him why and he said, “I just can’t think of anything else other than a rainbow.’ And some of them quarreled while they were drawing. They bragged about the things they had back home. They were like, “You don’t have these things in your hometown.” Every piece is so precious and authentic.

So this is how you started this project all of a sudden?

I began to ask myself questions like, “Am I going to live like this forever, just trying to get my work into galleries and museums?” The project with the children’s drawings started out of such concerns. One day, I was sitting at the Beijing Capital International Airport because I was supposed to pick up drawings by children living in Pyongyang there. A grandmother, who spoke with Busan dialect, was sitting next to me. She happened to see an airplane of Air Koryo [the national flag carrier of North Korea] and said, “How come our airplane is so small?” She described the airplane as ours and that was an “aha” moment for me. That’s when I decided to do work that can bridge the North and South.

That is the moment you began to dream about unification.

Yes, but unification is not something you can achieve just by dreaming. You have to think about what will happen after unification takes place. I think there must be a role that I can play as an artist.

What kind of role can an artist play?

Of the many responsibilities we have, one of them is casting fishing nets into the open ocean, so to speak. Scientists catch the fish then businessmen put the fish on the cutting board while politicians cut the fish into pieces and give them out to ordinary people. These are all organically connected to each other, but the very beginning of this is initiated by artists.

What does connection mean to you?

I like to pair up two starkly different things. I’d love to connect the north and the south, right and left, the past and future, question and answer, the poor and the rich. But look at pipes. If pipes need to be connected with each other, then they need to be empty.

What’s your definition of unification?

There is this airplane called unification. The fuel is dreams and the wings of the right and the left need to be the same. The right and the left should realize the existence of another wing. We need wind so that the airplane can fly with the wind of freedom. Lastly, we need a landing place. The landing place is where people take care of each other and share what they have.

What do we have to do to prepare for unification?

For example, if we want to make a united national football team in 2026, then what do we need? We need detailed plans for that. We can send astronauts to the moon together with the north. If you want to hit the bullseye, then you have to see far beyond the target, but politicians can’t see the bigger picture because they just try to win the game.

How will you install “Floating Dreams” in the middle of the Thames River?

An artificial rock will be made on the barge and the artwork will be placed on the rock. Waterproof coatings have been added on the printed drawings, as well as thin plates of plastic underneath along with the lights. Five hundreds drawings and 500 lights are woven together like mosaic tiles and will light up on the river.

What is the sculpture of a little child on the top of the installation?

It’s a robot that looks like a little boy holding a lit lantern. He moves slightly. He represents all the seniors who are looking forward to the day of unification. It also represents our children who have hopes in their minds.

If the installation is floating in the middle of the river, people won’t really be able to see the drawings.

About 3,000 promotional posters will be plastered at train stations in downtown London and other public places during the festival period. I chose 30 out of 500 drawings so that the selected pieces will have a chance to present their individual stories by taking turns for a minute every day.

Where does the installation go after Totally Thames?

I hope the installation would find places in other war-torn countries. I wish I can share hopes of the displaced with other refugees in conflict areas.