GM tailors its Malibu to drive up local sales

GM tailors its Malibu to drive up local sales 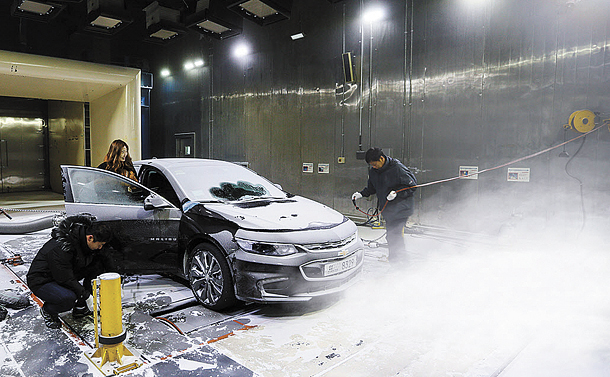 GM Korea employees conduct a test, placing the Malibu in the middle of an artificial snowstorm in the Cheong-na Proving Ground, Incheon, last month. [GM KOREA]

GM Korea is turning towards ‘localization’, focusing more on tailoring the vehicle to the Korean market prior to release.

The U.S. automaker has long had a strong image of selling vehicles manufactured abroad in Korea without modification. The Statesman (2005-2009) and the Veritas (2009-2011) were examples of this approach.

The new Malibu is the first product to be manufactured under this initiative. Last month, 4,618 Malibus were sold, surpassing the Renault-Samsung SM6, which sold 4,508 cars, followed by the Hyundai Sonata, which sold 5,168, excluding those sold as taxis. GM sales have recently declined but insiders say a turnaround might be possible by the year’s second half.

“Compared to pizza, our domestic models in the past were made of dough and toppings from the U.S. with a light touch of kimchi at the end,” said Kang Shin-nam, senior executive for GM Korea’s PG & Labs Division. “Malibu, on the other hand, is based on the same pizza dough but is topped with sauce and ingredients all made in Korea.”

The Malibu’s transformation was conducted at GM’s Cheong-na Proving Ground in Incheon.

The first stop was the wind tunnel laboratory, in which the company invested 25 billion won ($22.4 million). The indoor lab enables artificial controls of temperature and humidity. Before the recent release of its ninth-generation model, Malibu was the prototype of midsize sedans in America. For Korea, the wind-tunnel lab was the first stop. Although the weather outdoors was sweltering, a Malibu was placed in the middle of a heavy snowstorm. The thermometer read 18 degrees below zero.

“Malibu was tested under various temperature conditions from 35 degrees below zero to 55 degrees above zero,” said Kang. “The lab enabled us to reduce cost and time instead of experimenting in deserts or glaciated regions,” he added. “For example, we conducted a test of air-conditioning under intense heat like nowadays. Korean consumers do not like cool wind directly hitting the skin, so instead we adjusted the air-conditioning system so that it would softly spread coolness inside the vehicle.”

GM headquarters used data from wind tunnel experiments conducted in Korea on the Malibu models sold in other markets, such as China and the Middle East.

The road simulator room, an optimization experiment for Korean consumers - who are particularly sensitive to noise and vibration - was re-enacted. As I sat in the driver’s seat, a robot arm clutching the tires from the bottom shook the car up and down. Although the shakes were severe, no sound was heard from inside the vehicle.

On the testing track, there was a recreated road with bumps, a 30-degree slope, asphalt, gravel and deserts, all made from material transported from 33 countries. This is the first test track established by GM headquarters outside of the United States. Here, test drivers compared Malibu models manufactured in Korea to those sold in the U.S. On the domestic Malibu, the steering wheel felt lighter compared to the American model and the ride was much more stable while turning corners at a high speed. “As speed bumps are very frequent in Korea, unlike the U.S., we adjusted Malibu’s suspension to be harder than the soft original,” said Kim Jae-il, head of GM Korea’s Full-Midsize Vehicle Performance Development team. “The domestic Malibu is so significantly different from the American version that even ordinary people would be able to distinguish them.”

The Malibu was tempered in the Cheong-na Proving Ground for 18 months. “GM will be localizing more models for the Korean market in the future; Malibu is just the start of it,” said James Kim, President and CEO of GM Korea.