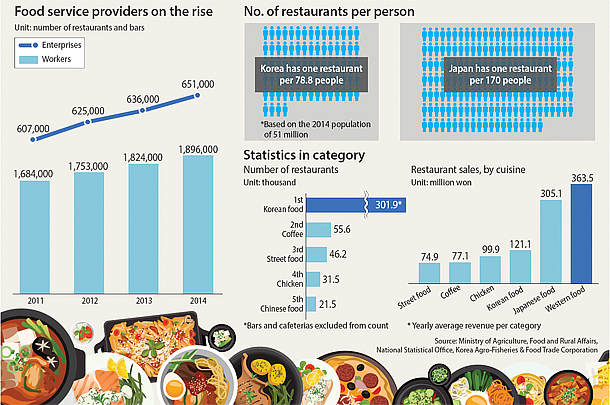 Earlier this year, a 58-year-old restaurateur surnamed Kang cut two of her staff at the Korean traditional restaurant she has been running for 28 years in Myeong-dong, Jung-gu in central Seoul.

She made her decision due to intensifying competition, as the number of street vendors increased and shops nearby shifted their business from cosmetics or fashion to food service.

“The competition has gotten so intense that not only are there more restaurants that hire people to tout, there are also stores that lie to customers who come to eat at a specific restaurant, telling them the place they came looking for is closed,” said Kang.

“Now that last year’s Middle East Respiratory Syndrome [MERS] crisis is over, we expected an increase in sales this year. But so far, this year’s numbers were disappointing.”

In 2014, a 65-year-old retiree surnamed Lee opened a steak house in Sinchon-dong, western Seoul, only to close it after two years. As sales were poor, even the monthly bank interest fees of 500,000 won ($451) became difficult for him. Monthly fixed costs, including rent, left him with almost nothing at the end of the month, leading him to close the business.

Despite the sluggish economy, the number of restaurants is climbing, making it difficult for owners to succeed.

The number of food service operators in 2014 was 651,000, which means there’s one restaurant per 78.8 people, according to the Ministry of Agriculture, Food and Rural Affairs. The number increased by an average of 7.2 percent annually for the past three years.

Western and Japanese-style eateries had just 10,397 and 7,740 operators, but the highest sales. As for yearly sales, Western restaurants made 363.5 million won, followed by Japanese (305.1 million won) and Korean (121.1 million won) establishments.

The influx of job seekers in their 20s and 30s is also heating up competition in the food services industry, experts say.

They also mentioned the fact that the restaurant business has low initial costs and do not require specific skills or techniques, making it also attractive for retirees. The deregulation of food service business on the streets or in traditional markets is also known to have also contributed in luring in younger generation to launch businesses.

“After the entrance of young operators aged from their 20s to 30s, we are seeing a noticeable development in the commercial districts of traditional night markets such as the Seomun market in Daegu,” said Cho Bo-hyun, member of the Daegu-Gyeongbuk Korea Foods Industry Development Association, “whereas 10 years ago there was only one restaurant operator from this age group, now we have four to five.”

However, the increase in restaurants intensified competition, making it harder for businesses to survive.

“Although owners that fail to withstand leave the market, there is a constant influx of fresh retirees,” said Kim Young-ju, regional president of Jung-gu for the Korea Foodservice Industry Association, “therefore although the total number of operating restaurants seems largely unchanged, the market is actually much tougher.”

“Whereas Japan has one restaurant per 170 people, Korea has twice that number,” said Choi Kyu-wan, a food service management professor at Kyunghee University. “Profit aggravation results in excessive competition; it’s a vicious cycle.”

Laws prohibiting unlawful request and bribery, or the so-called Kim Young-ran Act, will be implemented Sept. 28, a move expected to be unfavorable for the food service industry. Not only will meal expenses be limited to 30,000 won per session, meals between people with close business connections are predicted to decrease.

“Although splitting bills is a common practice in Europe, they also have globally acclaimed, high-end restaurants,” said Yeo Kyung-rae, CEO of the Korean Association of Chinese Food. “Likewise, the Korean food service industry should find a breakthrough by increasing product and service quality.”

Choi also warned of overheated competition in the industry sector. “As food service is an business that has a high possibility of closing down within the first year of operation, jumping into the market without preparation is highly risky.

“Therefore expanding knowledge in the food service industry and analyzing the commercial district are a must before starting anything else.”