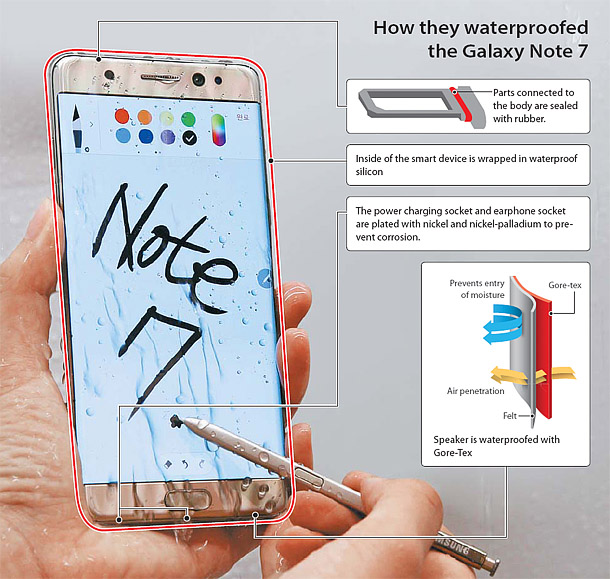 Water is the worst enemy of mobile devices. A single drop can burn out a circuit board, turning the high-tech device into a useless block of metal.

Owners of the Samsung Galaxy Note 7, which went on sale Friday, don’t have anything to worry about.

An 8 rating signifies that the device is waterproof when in 1.5-meters of water for 30 minutes.

How was Samsung able to prevent water from getting into the devices with so many openings, including the SIM card slot, the volume buttons on the side and the home button?

To make the device waterproof, Samsung wrapped rubber around every part that connects with the case including the power charging socket, earphone socket and the SIM slot.

“Like the rubber packing we put on our leftovers before storing them in the refrigerator, we have sealed rubber with precision on each and every part and then covered the overall mobile device with a silicon cover,” said Sung Beom-mo, who heads the wireless mobile equipment development team at Samsung Electronics.

They plated parts exposed to water such as the power charging socket with nickel and nickel-palladium to prevent them from corroding.

The biggest challenge was the speaker. If silicon or rubber was used, the sound would be barely audible.

Samsung solution was the high-tech waterproof and windproof fabric Gore-Tex.

“We purchased numerous materials from fabric manufacturers and after an endless stream of test we finally succeeded,” said Sung.

Another problem the development team faced was how to make the S-Pen waterproof. Simply wrapping rubber or silicon at the tip of the pen where water could enter seemed like the answer. But then the pressure sensor didn’t work properly.

When they tried to apply a very thin layer of waterproof material at the tip, it easily ripped when additional pressure was placed on the pen.

“It took us several months to find the right rubber material that is waterproof but at the same time had the appropriate thickness that would not affect the feeling when using the pen,” said Park Sung-ha, who heads a second development team at Samsung’s wireless business department.

The Galaxy Note 7 and S-Pen works normally underwater. This is possible because the liquid crystal display and the S-Pen response to each other via a magnetic field: the same principle in which iron shavings move in the direction of a magnet even when a piece of paper is placed between.

Even when there is water between the screen and the S-Pen, the Galaxy Note 7 recognizes and response to the S-Pen’s magnetic field.

The development of waterproof functions on electronics devices is hard enough in the planning stage.

And while non-waterproof devices’ development ends with assembly, waterproof products have to go through rigorous testing to make sure they work under water.

Samsung had to double the number of man-hours for assembly of the waterproof devices and testing in Suwon, Gyeonggi.

In the testing room the smartphones are placed in a 1.5-meter (5-foot) deep water tank for 30 minutes.

“One of the biggest complaints by smartphone users has been devices failing to work after they fell into water by accident,” said Kim Hyun-kyung, an official on Samsung Electronics’ marketing team.

“If phones with waterproof capability increase, such inconvenience will disappear.”

Other global smartphone developers that have waterproof smartphones include Sony’s Xperia, and a few models by LG Electronics that are sold in Japan. Some in the market speculate that Apple’s latest smartphone, the iPhone 7, will likely be waterproof.

Some analysts expect Samsung Electronics’ to further expand its global market share to the mid-20 percent range from the 22.2 percent recorded in 2015, widening the gap with Apple’s 15 percent, largely due to such newly added practical features demanded by consumers including an iris recognition system and the waterproof function.

“In the case of Apple, by revenue it still dominate the market as it accounts for 55 percent or $155 billion of the $350 billion,” said Park Ki-bum, BN K Securities analyst. “But by the number of units, the iPhone 6S and 6S Plus shrunk 20 percent compared to the previous model because consumer loyalty has been shrinking due to the launch of cheaper versions of iPhones and the lack of innovation on its operating system.

“We expect Apple to focus more on upgrading its hardware specs such as a dual camera on the iPhone7 and OLED display on the iPhone7S.”