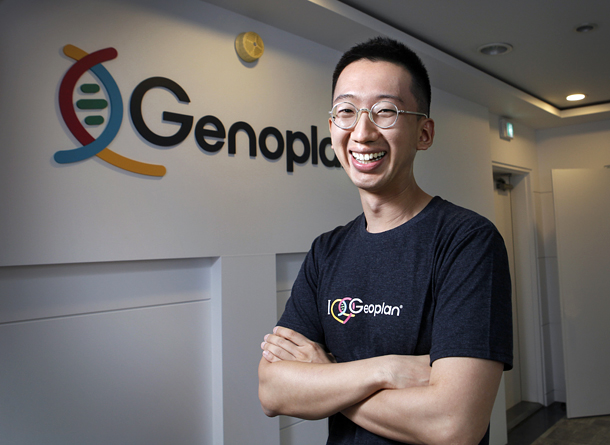 What if all it took to live a healthier life was a simple swab of the mouth?

Just over two decades ago, genetic testing to measure the possibility of developing certain diseases and ailments seemed like the stuff of science fiction, a phenomenon seen only in dystopian films like the 1998 hit “Gattaca.”

But in recent years, there have been numerous start-ups engaging in direct-to-consumer DNA testing, offering genetic analysis of various health indicators for $100 to $200.

Genoplan, a bio start-up founded in 2014, is Korea’s first to delve into the realm of direct-to-consumer DNA testing.

The company takes a sample of saliva from a client and analyzes the DNA within it. After a few weeks, the customer gets a report on 35 health indicators including the possibility of developing obesity and the likelihood of experiencing a yo-yo effect after weight loss.

The report can also provide novel information such as the effects of coffee and energy drinks on the body (which might suggest why certain people can’t pull off all-nighters) and the recovery time of the body after a night of binge drinking.

But the start-up goes beyond just testing the DNA. Through an app, it also provides recommended diet plans and workout routines based on the test results. For example, a person with difficulty developing muscle due to genetics might receive a suggested regiment that includes high-protein meals and cycling to build endurance.

Genoplan is the brainchild of Kang Byung-kyu, who also goes by Brian Kang. The CEO and founder said “breaking down the barriers to gene analysis and making it a more interesting, fun and even crazy thing” is what he hopes to achieve through his company, which has received $50 million in investments.

“I want to make a dynamic company, which is something hard to associate with when talking about a bio company,” Kang said.

“In order to get rid of the notion that genetics and biology are difficult and not interesting, and also get rid of the stigma that gene analysis is only something done when people want to confirm paternity or reveal an affair, I merged genetic analysis technology with something more approachable such as wellness and beauty.”

The 34-year-old Kang studied economics while pursuing a premed track at Boston University and went on to obtain a master’s degree from its School of Medicine. Shortly after, he was recruited by Samsung as a gene researcher, working three years before quitting to build his own company. 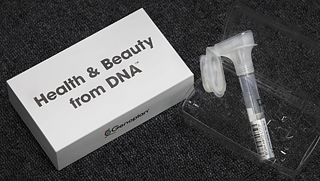 Above: A Genoplan kit includes a plastic container for saliva samples. Right: Test results, shown through an app, include diet and workout plans. [PARK SANG-MOON, GENOPLAN]

Despite his credentials, a bio start-up was not what he first had in mind.

Instead, Kang started a social enterprise to provide educational programs for underprivileged children. He soon found out the hard way that such a venture does not always translate to revenue and moved on to his next project, Genoplan.

Kang took out a 10 million won ($8,900) bank loan and started recruiting for a bio researcher. Only two people applied, he recalls, and he immediately hired one of them.

“Come to think of it, I feel thankful that he decided to work for our company, which at the time didn’t have any foundation,” Kang said. “I only had a rough and raw vision.”

This “rough and raw vision” was pursuing the full potential of DNA testing. When asked what he felt genes could tell us, Kang replied, “Just about everything.”

Kang believes incorporating biotechnology into health and beauty can help warm people to the idea of having their DNA analyzed, a process that still unnerves many.

“Gene analysis is done one time, but the result can be applied to so many parts of our lives and products,” he said. “I want to link all the dots out there with biotechnology.”

In just two years, Genoplan has secured more than $50 million of investment, much of it from Japanese technology company SoftBank and Samsung Ventures. Kang was also nominated for the most awards at the government-led start-up support program K-Global Startup, helping him gain recognition among investors.

When there was job opening at Genoplan last month, more than 1,000 applied. Kang hired one more researcher, and now his Gangnam-based office has 21 employees.

Genoplan currently has two laboratories, one in Korea and another in Japan. 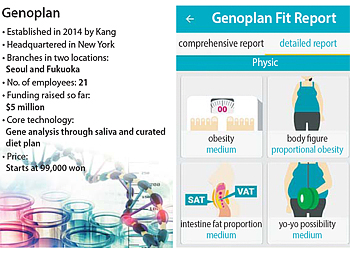 When asked why he specifically wanted to provide the service to Japanese consumers, Park said there was no choice.

“I didn’t have much knowledge about the law when I first started the business, and it wasn’t until I actually tried to register a DNA analysis laboratory that I found that it was illegal for non-medical entities to run genetic tests in Korea,” Kang said.

“It was a very critical point because we almost closed the business. Luckily, I found out it was okay to run genetic tests in another country where the local law allows it, which is why I set up a laboratory there.”

Although Kang initially hoped to use DNA testing to offer insight into personality traits, the probability of getting cancer and other more serious health indicators, his current business is limited to beauty and wellness. “In the long term, I want to take the company to the next level such as inventing new medicine,” he said.

Kang pointed to U.S.-based start-up Counsyl as a model. The start-up specializes in running DNA tests for couples planning to have children to find out if there is any possibility that the newborn might have health issues.

“I hear that more than 5 percent of American parents are using the service when having a child,” he said. “That is the ultimate path I want to take with my company. But aside from the technology aspect, it will take a longer time because of restrictions and moral issues surrounding genetic testing in Korea at the moment.”

Genoplan plans to expand overseas next year. Kang said Singapore, Taiwan and China are some of the most viable options.

“The biggest challenge for us right now, which I believe will apply to all bio companies out there, is to know what consumers want to do with their DNA information,” Kang said.

“We should not stop at just testing the DNA, which will make people to think ‘so what?’ It is my job to think of what tangible outcome can be given to consumers and how much detail we can actually provide about their genes.”