EBS’s documentary fest kicks off: Fifty-three films will be screened around Seoul and on TV this week

EBS’s documentary fest kicks off: Fifty-three films will be screened around Seoul and on TV this week 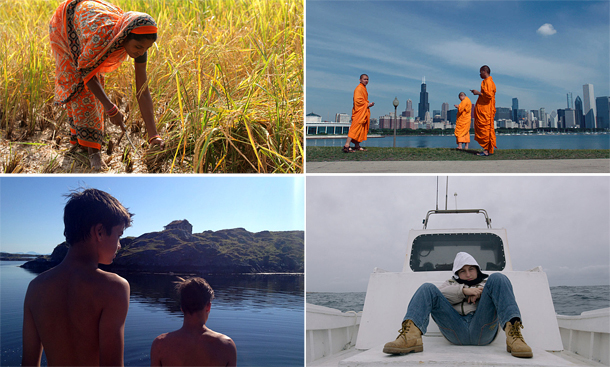 Clockwise from top left: “10 Billion - What’s on Your Plate?”; “Lo and Behold, Reveries of the Connected World”; “Fire at Sea”; “Brothers”. The EBS International Documentary Festival will show 53 documentary films from 30 countries for the upcoming week through its channel and at various venues.[EBS INTERNATIONAL DOCUMENTARY FESTIVAL]

Although documentary films in Korea have yet to become mainstream, people here have begun to appreciate the genre in recent years.

The EBS International Documentary Festival is one of few festivals in Korea dedicated documentary films and has been credited with having helped the genre gain traction.

The festival’s 13th edition kicks off today. For the next week, 53 documentary films from 30 countries will be screened in various venues across Seoul as well as on the EBS network.

While more information can be found on the festival’s website (www.eidf.co.kr), the JoongAng Ilbo, an affiliate of the Korea JoongAng Daily, selected some of the themes to watch for in during the festival, with the help of the festival’s programmer Sin Eun-sil.

Several films shed light on the lives of children across the globe, including refugees.

“Fire at Sea,” by Italian director Gianfranco Rosi, revolves around Samuele, a 12-year-old living on the Sicilian island of Lampedusa amidst the European migrant crisis. The ordinary lives of the islanders are juxtaposed with the migrants’ dangerous crossing, which sometimes resulted in shipwrecks and hundreds of people drowning.

“It deals with the grave issue of refugees from a warm-hearted perspective,” Sin said. The film won the Golden Bear award at this year’s Berlin International Film Festival.

“Brothers,” by Aslaug Holm, one of Norway’s most acknowledged documentarians, is the result of Holm filming his two sons growing up over eight years. Watching how they develop and mature both physically and mentally is amazing, Sin says. The scenes illustrating the beauty of Norway’s natural environment are an added bonus.

There is also a film by Werner Herzog, the German filmmaker considered one of the most influential figures in his country’s film scene. One of his best-known works is “Grizzly Man” (2005) which explores the life and death of bear enthusiast Timothy Treadwell.

This time, Herzog is tackling how the internet has changed our lives. “Lo and Behold, Reveries of the Connected World” explores technologies like self-driving cars, soccer-playing robots and the likelihood of life on Mars.

“10 Billion - What’s on Your Plate?” by German filmmaker and bestselling author Valentin Thurn is about the search for future food sources. As the population rises, mankind is bound to face food shortages, and Thurn travels the world - India, Thailand, the United States, United Kingdom, Germany among others - in search of eco-friendly alternatives.

Reality of life in Korea

“A Room for Rent” by Kang Min-zy, on the other hand, is a reality check for Korean youth battling unemployment and an uncertain future. It’s about a 24-year-old woman who will be graduating from college in seven months. Before being thrown into the real world, however, she first has to find a room in Seoul that fits her meager budget of 200,000 won ($180) per month.

“Although it is a story about the concerns of an individual, it’s notable how the director tries to engage with contemporary Koreans,” Sin said.

She added that despite the grim reality Kang portrays, the filmmaker manages to lighten it up in places with some occasional laughs.