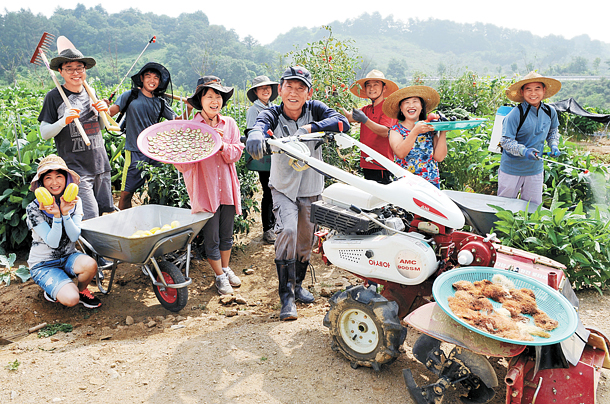 Farmers at the Jecheon City Agricultural Technology Center in North Chungcheong show off their produce earlier this month. The rural training center welcomes urbanites to move in for a year and learn basic farming techniques. [KIM SEONG-TAE]

I recently had the opportunity to visit an interesting farm in Jecheon, North Chungcheong, 104 miles southeast of Seoul. It was six months after the Jecheon city government combined forces with the Ministry of Agriculture, Food and Rural Affairs to build an agricultural training center for urbanites who knew absolutely nothing about farming but wished to temporarily move to the countryside and learn the ropes.

Local authorities wished more people could learn about the charms of dwelling in Korea’s rural areas, in the belief that it would help the country cope with the shift of people moving from rural to urban areas.

The Jecheon City Agricultural Technology Center was launched in February with the mission to train soon-to-be farmers in a manner somewhat like a hagwon, or cram school. Participants move into the village for a year, paying the city between 180,000 and 250,000 won ($163 to $226) per month with a 600,000 won deposit.

In return, the city provides each student with a small house and land, in addition to farming lectures led by agricultural experts. The Jecheon City Agricultural Technology Center is nestled in a village more than 3,000 square-meters (3,588 square-yards) in size that comprises a training center, a factory, two vinyl greenhouses, 30 houses and a small plot for each household. The entire project required 9.6 billion won when it opened, which was jointly paid through national and municipal coffers.

Yoon Jae-sam, 58, who heads the agricultural center, calls it a “village filled with a bunch of beginner farmers.” Thirty-four people from 25 households have moved in so far.

When I dropped by the Jecheon City Agricultural Technology Center on Aug. 10, what stretched before my eyes were rows of various crops including sweet potatoes, peanuts, tomatoes, chives, corn and red peppers. Wagons, boots and farming utensils were scattered in front of each house. Sesame seeds were neatly spread out on mats in a corner of each yard, glistening in the sun.

From far away, the fields looked perfectly mended. But up close, it wasn’t long before I realized why Yoon, the center’s chief, had made that earlier remark: some of the produce was rotting, while some looked bizarrely smaller than average.

Yoon explained that at one section of the training center, villagers collectively grow sweet potatoes, potatoes, corn, tomatoes and watermelons.

Any other plant or crop is grown on a separate piece of land allotted to each household. All in all, there are more than 30 different types of produce.

“Potatoes and sweet potatoes turned out quite well because they’re easy to harvest,” said Yoon. “The watermelons, on the other hand, that was a tragedy.”

As I head down to the watermelon field, I saw that most of the melons had grown to only the size of a fist. The largest specimen I came upon was about the size of a handball. I had to ask Yoon whether they were at least edible. He quickly shook his head.

“You can’t taste a single ounce of sweetness. It’s just bland,” he said. “But rather than considering it a complete failure, the students here have come to realize that it’s all part of the learning process.” Yoon added that he keeps with him a little notebook in which he jots down all the farming mishaps he’s experienced in Jecheon.

At one point, he said he and the other farmers tried organic farming methods, using natural herbs as alternatives to pesticides. Again, it turned out to be a complete disaster, Yoon said with a chuckle.

“It was a huge mistake to think we had a chance with organic farming without even learning the basic techniques,” said Yoon. “We were like little school kids who didn’t know addition and subtraction, but tried to skip through it all and solve a math problem requiring calculus.”

Do Wan-joon, 52, an office worker who is expecting to retire in a couple of years, admitted that farm life was tougher than he had ever imagined.

“At this point, I’m literally just doing whatever I can,” said Do.

Kim Myeong-sup, 30, spent five years in Bucheon, Gyeonggi, studying for the civil service exam. He advanced to the final round twice, but failed both times. Now he’s at the Jecheon training center learning how to grow red pepper, cabbage and kale, hoping to pursue a career in farming.

“There’s something simply wrong with my kale,” lamented Kim. “It’s way too bitter, but I can’t figure out why.”

Shin Chul-kyeong, 40, said one of the greatest virtues of the training center was that it offers a glimpse into life in the countryside, something many Koreans fantasize about when imagining their own retirement.

“You cooperate with your neighbors here, or sometimes come into conflict with them and solve it the way real farmers would do,” said Shin. “It enables me to experience all the trials and errors early on.”