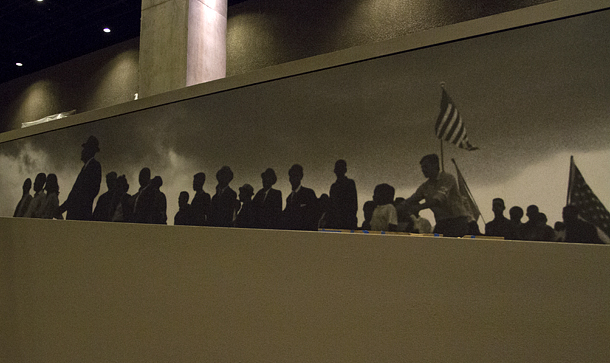 An art piece depicting the Civil Rights movement is seen at the Smithsonian National Museum of African-American History and Culture in Washington during a press preview on July 18. The museum’s grand opening will be on Sept. 24. [AP/NEWSIS]

WASHINGTON - Lonnie Bunch leans forward to peer inside a slave cabin from Edisto Island, South Carolina. The dark and cramped interior defies his attempts to showcase the small living space its occupants subsisted on.

Bunch flips on the flashlight on a borrowed smartphone, illuminating for his guests the craftsmanship, the hard work and the love that the cabin’s former occupants put into what little they had.

The unification of the old and the new, and the use of modern techniques to explain the historical past - that’s what the National Museum of African- American History and Culture and Bunch, its founding director, are striving for when the newest Smithsonian museum opens on the National Mall next month. President Barack Obama will help dedicate the museum on Sept. 24.

Proud of the striking, dark brown angular museum, Bunch sees its goal as helping all Americans understand and appreciate the rich cultural history of African-Americans, and to shine a light on the contributions and achievements of blacks to what the United States has become.

“This is an opportunity to take an amazing culture, and understand what it mean to be an American through this lens,’’ said Bunch, as he guided observers through a special sneak peek inside the building.

The museum is designed to take visitors through African-American history in the United States from slavery, on the lower level, to a reproduction of Oprah Winfrey’s television set upstairs and artifacts from Obama’s first presidential campaign. The slavery exhibits are in rooms with small cramped walls to simulate slave ships. Also, there are pieces of an actual slave ship, the Sao Jose Paquete de Africa, which wrecked off the coast of South Africa while carrying more than 400 enslaved people from Mozambique.

The slave cabin, from the Point of Pines Plantation on Edisto Island, is one of the largest exhibits and was dismantled and reconstructed piece by piece inside the new museum. While the names of the slaves who lived inside the cabin are unknown, Bunch said the exhibit is a good way to help humanize the people who lived through slavery and to help explore the meaning of their lives.

“What’s important about this is that while slavery was a system that controlled people, it was also a system where people built homes and families and tried to sort of craft a life as best they could,’’ he said.

Interior construction is nearly done, Bunch said, as he led a group of journalists around wires and exhibits still under construction: Parliament-Funkadelic’s Mothership is completely covered, although its distinctive shape is instantly recognizable; a Maya Angelou quote placard reading “I am the dream and the hope of the slave’’ sits on a table waiting to be affixed to a wall along with quotes from Obama, Nikki Giovanni and Black Lives Matter founder Alicia Garza; and the playbill announcing Ira Aldridge as the first black man to play Shakespeare’s Othello in 1857 in England is hidden behind brown paper on the wall to keep it safe. Construction on the distinctive looking building is done, Bunch said, and about 40 percent of the exhibits are already inside.

Some of the artifacts are so big the museum had to be built around them: a 90-year-old, 44-seat Southern Railway car that will help explain Jim Crow laws in the South, and a 20-foot-plus guard tower from the Louisiana State Penitentiary prison named “Angola’’ after the plantation that once stood in its stead. It explores the use of policing and laws in the South that were designed to help keep newly freed blacks in bondage.

History can be seen even from the shape of the museum, Bunch said. The bronze exterior of the building is actually a latticework based on historic ironwork created by African-American slaves and freedmen in the South, which fits into the goal of emphasizing the hidden history of African-Americans, Bunch said.

Our “goal was to craft a building that would help us remember the rich history of the African-American, so if you look at the building, it has wonderful angles that are shaped both by West African material and women whose hands were at prayer at exactly that angle,’’ Bunch said.

But history won’t be static inside the museum, Bunch said.

For example, in the comedy exhibit right alongside quotes from famous black comedians such as Richard Pryor and Redd Foxx is a joke by Bill Cosby, the first African-American to star in a dramatic show on network television. Cosby faces allegations that he drugged and molested dozens of women over five decades, and the 78-year-old comedian has been spending millions in an aggressive bid to stay out of prison, salvage his reputation and avoid legal judgments that could threaten his fortune.

When questioned about the appropriateness of including Cosby, Bunch said the museum will “tell the story of what Bill Cosby was, what his impact was and... the fact that his legacy is now being questioned. That’s it.’’

The museum will not stop collecting and curating items, Bunch said, and will strive to stay modern. The Oprah Winfrey Theater inside the building will host conferences on race and other issues, Bunch said.

And the museum itself is still changing. Basketball superstar Michael Jordan just gave a $5 million gift to the museum, which will now name its historical sports “Game Changers’’ section the Michael Jordan Hall.

“African-American history did not stop with President Barack Obama’s election, and so we won’t stop there either,’’ Bunch said. “There will be plenty for us to talk about in the future, and we’re looking forward to helping Americans understand the contributions of African-Americans to the rich tapestry of our culture.’’ AP