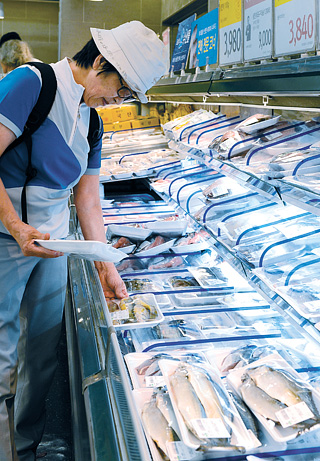 A consumer shops for fish at E-Mart in Yongsan District, central Seoul on Monday. Ahead of the most celebrated national holiday in Korea, Chuseok, the government released 8,310 tons of marine products that it had stored in the hope of stabilizing prices. This included 3,231 tons of pollack, 1,838 tons of mackerel, 2,202 tons of squid, 133 tons of yellow corvina, 118 tons of hairtail and 788 tons of Japanese Spanish mackerel. The government supplied fisheries have prices that are 10 percent to 30 percent cheaper than other retailers. [NEWSIS]