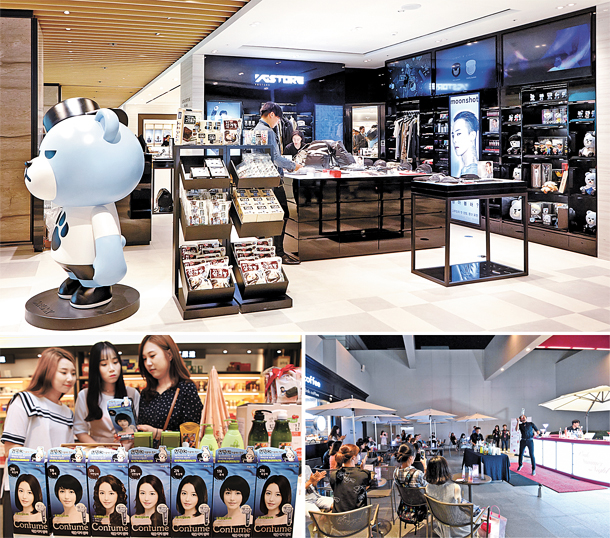 Competition among new and old duty-free shops in Seoul is getting more intense. A store crammed with high-end fashion labels is no longer a guaranteed success.

Shinsegae Duty Free, which opened its first Seoul tax-exempt shop at Shinsegae Department Store’s main branch in Myeong-dong, central Seoul in May, has teamed up with YG Entertainment to cater to the increasing number of foreign hallyu (Korean Wave) fans.

A diverse lineup of products featuring YG-affiliated stars such as Big Bang and 2NE1 are on display at YG Store on the 12th floor. Figurines of Big Bang members and stuffed bears of YG’s symbolic character Krunk are a few products for sale. YG Entertainment’s cosmetics brand Moonshot is also available at the shop. 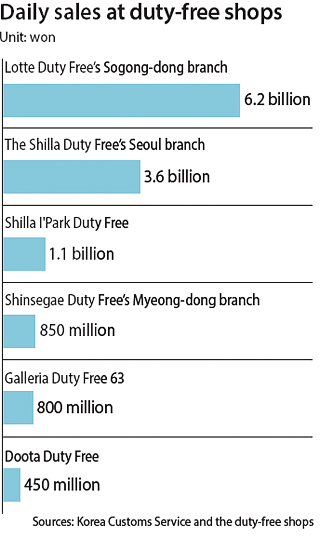 A Shinsegae Duty Free spokesperson says K-pop star byproducts are a key profit generator at the tax-exempt shop. Moonshot’s “G-Dragon perfume” and Krunk figurines sold out on the day the inventory was stocked. The spokesperson said 95 percent of shoppers at YG Store are Chinese or Japanese.

K-character shops, which sell character products from mobile messengers KakaoTalk and Line, are also a hit.

Doosan Group’s ambitious Doota Duty Free, which opened in the bustling shopping district of Dongdaemun in eastern Seoul in May, targetedlate-night shoppers. As its daily sales have fallen drastically among other players, Doosan Duty Free is coming up with creative strategies to lure customers.

While other tax-exempt shops close around 9 p.m., Doota Duty Free stays open until 2 a.m. Sales generated between 9 p.m. and 2 a.m. account for 30 percent of the shop’s entire sales, a spokesperson said. To lure visitors amid the prolonged heat wave, Doota Duty Free is having a free late-night cocktail show until Sunday.

In one corner, the shop has a unique choice of items for sale.

Household products such as digestive medicine and ramyeon (Korean instant noodles), are on display, but in packaging usually reserved for more expensive products.

“I thought it was red ginseng medicine or something,” said a 34-year-old Chinese shopper at Doota.

“The package is quite luxurious. I think I will give it as gifts to my friends.”

This type of affordable product is popular among shoppers, the Doota Duty Free spokesperson said.

“Interest in K-food is quite high,” the spokesperson said.

Shilla I’Park Duty Free, which launched in March under HDC Shilla, a joint venture between Hotel Shilla and Hyundai Development Company, offers regional specialties on the seventh floor of its five-story complex. It is first time a local duty-free shop dedicated a shop to sell regional specialties.

Items on display include Gangwon Province’s natural hair dye and Korean Fishery Trade Association’s dried seaweed which can be eaten as a snack.

“Japan’s Tokyo Banana or Nagasaki Castella are not-to-miss souvenirs when traveling to Japan,” said Lee Jong-ho, a spokesperson for HDC Shilla. “We see potential in our own regional products to secure a reputation like that too. We are going to keep excavating diverse regional specialties to offer at our duty-free shop.”

Sales of such regional specialties rose more than four times compared to when the branch first started business in March.

Shilla Duty Free, on the other hand, saw opportunity in the growing pet market, so it has been selling pet-related products for the first time since April.

It currently has five pet-dedicated brands including high-end label Louis Dog and American dog harness brand Ruffwear. A spokesperson said the company’s housing of pet brands is targeted toward some 10 million pet owners in Korea as well as some 90 million in China.

Increasing brand awareness is another major mission for new operators.

Hanwha Galleria’s newly opened Galleria Duty Free 63 at the 63 Building in Yeouido, western Seoul, announced an eye-catching part-time job opportunity early this month, promising $20,000 weekly for three ambassadors for the new tax-exempt shop. Some 3,000 people applied for the post; 77 percent of them were foreigners.

“In the past, the duty-free business was considered a golden egg,” said an industry insider.

“But it is a nonstop competition now. Housing as many luxury brands as possible is important, but offering differentiated products and shopping experiences play a vital role too.”