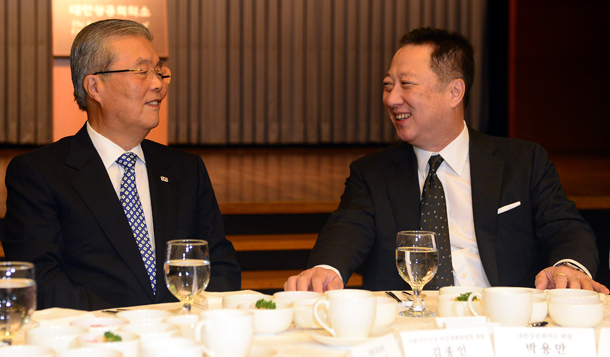 Instead of celebrating his third anniversary, Park invited the outgoing leader of the opposition Minjoo Party, Kim Jong-in, to a forum to help businesses have a better understanding of economic democracy, which was first championed by Kim, who is also an economist.

“We have created this opportunity so that business leaders can have a better understanding on what economic democracy is,” Park, chairman of the KCCI, said in the opening speech.

The opposition party leader stressed that he doesn’t consider economic democracy, which stresses cooperation between big and small companies while restricting the market dominance of conglomerates, a shackle on the business community.

“Without creating a proper environment, it will be difficult for the market to succeed,” Kim said.

Without tough regulations against monopolization, no country will be able to enjoy the development of new companies that would expand in the industry, he said. He cited U.S. President Jimmy Carter administration’s crackdown on monopolization in the telecommunications market led to the boom of electronics and the IT industry.

According to KCCI, its chairman, who took over his current role from CJ’s Chairman Sohn Kyung-shik, in August 2013, has been trying to improve Korean businesses while contributing to economic growth through various campaigns, much like the economic democracy lecture.

Park has a year and a half left in his term.