Shoppers snap up hot, spicy foods to cool off

Shoppers snap up hot, spicy foods to cool off 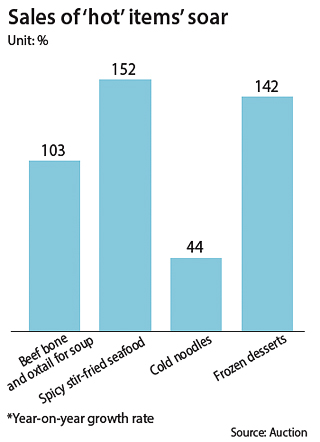 Koreans beat the heat with “hot” items during the past two weeks as the country has been experiencing an unprecedented heat wave with temperatures rising as high as 36 degrees Celsius (96.8 degrees Fahrenheit) in Seoul.

Warm and spicy foods showed a higher year-on-year sales growth rate than that of cooler food items, according to sales from Aug. 8 to 21 at Korean online shopping platform Auction.

Packaged items of spicy foods such as stir-fried octopus showed a year-on-year growth rate of 152 percent. Spicy food in Korea is seen bringing back appetites lost during a sweltering summer.

Sales of fresh ginseng, red ginseng extract, red ginseng candies and related items rose an average of 71 percent during the same period last year. Fresh ginseng that could be brewed into tea or ground with milk showed the steepest rise -133 percent.

Ginseng, which facilitates blood circulation, is an ingredient in Korea that is believed to recover one’s energy by increasing body temperature.

Home products that warm up the body temperature also sold more than expected.

“The sales trend in August, which had its peak with summer heat, showed a preference towards ‘hot’ items which would help consumers endure the heat and rejuvenate with healthy food,” said an Auction spokesperson.

“With the heat wave expected to go on for a few more weeks, these items’ popularity will go on for a while longer.”