Lee determined to stay at work in spite of probe

Lee determined to stay at work in spite of probe 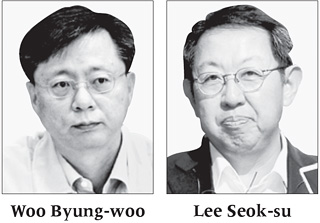 Despite the Blue House’s extraordinarily strong attacks over an alleged leak of details in his investigation, the special inspector in charge of investigating top presidential aides said Monday that he will stay on with his job.

Lee Seok-su, appointed last year by President Park Geun-hye as the first independent inspector general to operate a new anticorruption system against top Blue House aides and the presidential family, was accused of leaking information regarding his investigation into a scandal-plagued senior aide to Park.

After nearly a month of investigation, Lee concluded earlier this month a probe into Woo Byung-woo, senior civil affairs secretary to the president, and asked the prosecution to further investigate him.

Following media reports on the leak, the Blue House attacked Lee for having committed a grave violation of the law, and he then promptly used his vacation days from Friday until Sunday.

He showed up at his office Monday morning to face reporters and when asked if he would step down, Lee said, “Do I have to resign?”

He then said, “Isn’t it this administration’s principle that a public servant does not step down just because of an allegation?” Indeed, amid growing demands for Woo’s resignation, the Blue House made it clear that the president will not fire an aide over an allegation.

The three-year tenure of the independent inspector general will end March 2018.

He also dismissed the Blue House’s demands for stern punishment against him.

“The comments by the presidential senior secretary for public affairs had a condition attached saying, ‘if the media reports are true’,” Lee said. “And it is inappropriate for me to comment on such hypothetical statements.”

Lee said he has no hard feelings toward the Blue House. He also said he will explain his position to the prosecution if he is investigated on charges of leaking confidential information obtained during official duty.

Asked if law enforcement authorities were uncooperative with him during his probe into Woo, Lee said, “It’s not something I should discuss here.”

An earlier media report, however, said Lee complained to a journalist that police had snubbed his request for data. “The civil affairs senior secretary probably wrung the police’s neck,” Lee was quoted as saying. “The police don’t move.”

Lee said he will proceed with his job as an independent inspector regardless of the prosecution’s plan to investigate him.

“I was told that Lee opened probes against two other close confidants of Park around the time he began the investigation into Woo on [July 21],” a senior official from the ruling party said.

Lee’s office confirmed that inspections are ongoing against other top officials, but refused to discuss the details, including the targets of the investigations and when the probes began.

The office also admitted that it had asked the prosecution to open a probe into one of Park aides before it requested an investigation into Woo.

Lee, 54, studied law at Seoul National University and passed the bar exam in 1986.

Before his appointment to the special inspector general post, Lee was vetted by Woo last year.

Woo and Lee worked together at the Gyeongju branch of the prosecution in 1992. “They were close at the time,” said a former prosecutor-turned lawyer. “They called each other brothers.”

They then met again to serve in the judicial reform taskforce of the Roh Moo-hyun administration in 2005.