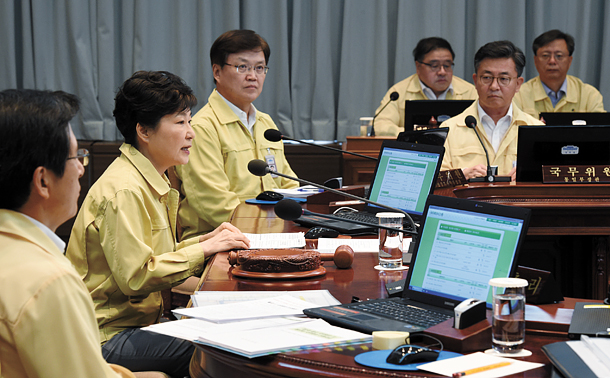 Instability in North Korea is growing as members of Pyongyang’s elite are increasingly turning back on their communist homeland, President Park Geun-hye said Monday, fueling speculation that the South is preparing for a possible regime change in the North.

Park hosted a National Security Council meeting in the morning as South Korea and the United States began an annual joint military drill. The Ulchi Freedom Guardian (UFG) exercise involves some 25,000 American troops and 50,000 South Korean soldiers, and Park said the government and military are ready to counter any possible North Korean provocation in response to the drills. At the meeting, Park made a conspicuously strong remark questioning the stability of the Kim Jong-un regime.

“The North Korean regime is taking no account of the people’s lives, while it oppresses the people with continuous rule by fear,” she said. “Recently, even the elite in the North is collapsing and high-profile figures are increasingly escaping their homeland and defecting to foreign countries. As the signs of serious cracks emerge, the regime’s instability is growing.”

She warned that Pyongyang may carry out cyberattacks and armed provocations on the South to divert public attention from its domestic problems.

She issued a similar assessment of growing instability within the North Korean ruling class at a cabinet meeting later in the morning.

“The North is walking on an extreme path to maintain the regime’s security, and its key elite are increasingly betraying the regime and defecting one after another,” Park said. “We can never lower our guards. Cabinet members must accurately grasp the crisis [in the North] and sternly counter any moves that will fuel internal conflicts in the South.”

Park’s assessments of instability in Pyongyang’s ruling circle came just days after her government’s announcement that Thae Yong-ho, the second-highest diplomat in the North Korean Embassy in London, defected to the South.

More defections of North Korean diplomats and their families were reported by local media, but the Unification Ministry refused to confirm the stories. Among the rumored defections was Kim Chol-song, a third secretary at the North Korean Embassy in Russia. After disappearing from an airport in St. Petersburg, Kim and his family reportedly defected to the South, media reports including UPI said.

Last week, Park made clear she will treat the North Korean people and the Kim regime with separate approaches and urged North Koreans to join her initiative of unification.

In the Liberation Day address delivered on Aug. 15, Park issued a direct message to the North Korean people and officials, prompting speculation she was hoping for regime change by encouraging the North Korean public and lower-level officials to turn against their rulers in Pyongyang.

“Fellow North Korean officials and people of North Korea!,” Park said, “Unification will bring about new opportunities for all of you to pursue happiness and make the best of your abilities while being treated equally without any discrimination or disadvantage.

“I look forward to your participation in ushering in a new era of a unified Korean Peninsula, free from the terror of nuclear weapons and war, and where human dignity is respected,” Park said in her speech.

Park also directly addressed human rights in the North. “We will not turn a blind eye to the plight of North Korean residents who suffer because of the wrong decisions made by the North Korean authorities,” she said.

Tensions between the two Koreas escalated further on Monday with the launch of the annual UFG military exercise.

The North Korean military said Monday that it will turn Seoul and Washington into “a heap of ashes through a Korean-style pre-emptive nuclear strike,” adding that its “first-strike” units are ready to retaliate on the South Korean and U.S. forces involved in the drills.