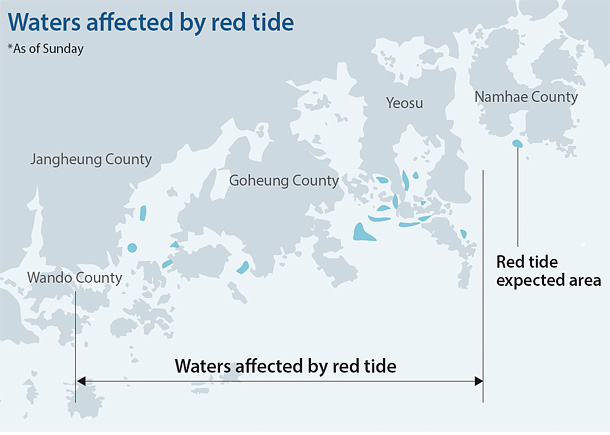 The 42-year-old owns a 1.1-hectare (2.7-acre) fish farm near Tongyeong in South Gyeongsang where he used to have about 800,000 rockfish, but earlier this month his fish began to die off due to high water temperatures.

Making matters worse, there is a warning that a red tide is coming to the sea in Tongyeong.

“Sixty percent of my rockfish died due to high water temperatures,” said Seon. “Seeing that there’s a red tide coming, I’m really worried that the other 40 percent of my fish will die out.”

According to governments of different regions, including South Gyeongsang, about 1.5 million fish from 38 fish farms on both land and sea died this month due to high temperatures. This amounts to about 1.9 billion won ($1.6 million) in losses.

Currently, the South Gyeongsang provincial government is monitoring 33 places that are likely to be affected by the red tide. As of Monday, the algal bloom did not exceed 10 individual protists per milliliter, which is the level required for issuing a red tide warning. But fishermen and fish farmers are on edge after a report of a red tide sighted in the sea near Yeosu, South Jeolla.

“After an inspection, there were no signs of red tide yet,” said an official from the South Gyeongsang provincial government. “However, there is still a high possibility of red tide coming to this area, so we are going to monitor the waters more closely.”

The South Gyeongsang government plans to combat the red tide early when it is detected in Namhae County to prevent its spread to other waters in the region. The government has prepared 360,000 tons of red clay, 18 pieces of equipment used for scattering the clay and 1,300 water purification boats along the channel where the red tide is likely to flow.

Fishermen are on an alert, as well.

“We can’t stop the damage from the red tide,” said an official from a federation that manages Tongyeong’s fish farms, “but we are doing everything we can to prepare for and minimize the damage that it normally causes.”