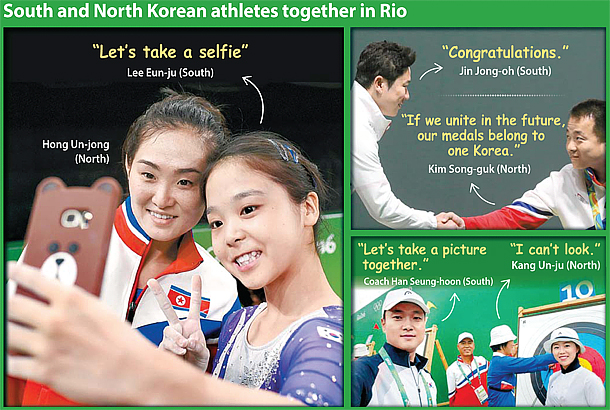 The Ancient Olympic Games in Olympia, Greece, were indeed a special time. During this quadrennial athletic festival, delegations from Greek city-states took part in various sporting events and any hostilities among the city-states were temporarily ceased in what was known as “Olympic peace.” Today, that spirit of the Olympics lives on, as we saw at this year’s Games when athletes from South and North Korea, two nations essentially still at war, enjoyed a friendly encounter and transcended the animosity and tension that has lingered on the peninsula for over a half a century.

It happened when South Korean gymnast Lee Eun-ju spotted Hong Un-jong of North Korea at the Rio Olympic Arena during a training session before their individual qualifiers. The 17-year-old couldn’t help but make her way over to meet the bronze medalist from the 2008 Beijing Games, and the photo of the two gymnasts taking a selfie with Lee’s smartphone quickly went viral online. Many called the moment an example of true Olympic spirit. The International Olympic Committee President Thomas Bach lauded the two athletes, while the Washington Post chose it as one of the “biggest political moments at the Rio Games.”

This rare moment of concord, however, did not end with the selfie. On August 10, when South Korean shooter Jin Jong-oh found himself at the top of the podium after winning gold in the men’s 50-meter pistol event, he was congratulated by Kim Song-guk, a North Korean shooter who took bronze in the same event. The two were spotted shaking hands during the award ceremony.

“If we [the two Koreas] become one, these medals will bear more significance,” Kim said during a press conference after the event. “If we unite in the future, the gold and the bronze will belong to one Korea.”

Then there was Chang Hye-jin, a South Korean female archer who took two gold medals at this year’s Games in the women’s team and individual events, and her North Korean counterpart Kang Un-ju. The two archers met in the round of 16 in the individual event, in which Chang came out with a win to advance to the quarters.

“I had a brief conversation with Un-ju the other day,” Chang said, “she asked how I shoot so fast, and also about my gears.”

“[The selfie] was a powerful moment, politically, and exactly the type of moment that I used to be sent to these events to write about,” said Jean H. Lee, a Seoul-based Global Fellow at the Wilson Center in Washington, D.C. and a lecturer in North Korean studies at Yonsei University who also worked as the Associated Press correspondent at the news agency’s Pyongyang bureau in 2012. “[It] shows how the international sporting stage can be a platform for a powerful political message. In this case, one about peace and camaraderie.”

Lee added that the selfie is meaningful in a number of ways. Not only does it show the political import of athletics, but it shows the “the lighter side of North Koreans,” as well as their maturity.

When asked how North Korea might react, she said, “I don’t think Hong Un-jong will be in any trouble for having taken a selfie. Regardless of her performance in Rio in the gymnastics competition, she is one of their most celebrated athletes - a People’s Hero award winner.”

Lee added, “And despite the tensions between North and South, we should keep in mind that North Korea champions the idea of reunification. Also, the regime sees international sporting events as a promising vehicle for sports diplomacy.”

While tension between the two Koreas is higher than ever, such moments of respect between athletes of South and North Korea may be a small crack in the ice, but then again every thaw begins with a crack.